These Boots Weren’t Made for Much! 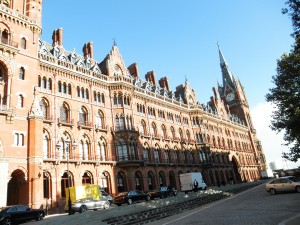 Hmmmm…. Hopefully things only improve from here.  When my phone alarm went off, I reached for it and dumped my whole glass of water on the floor and had to get up and sop it up.  The up side is that it was only on the floor and not the table or the clock, and I had a fresh hand towel in my room that sopped it all up (well, my socks helped).  I dropped everything I touched, showered, got coffee and went out for a smoke, forgetting I had coffee until I was almost done.  I had another smoke with my coffee, but still no luck with my digestive system.  I ate a banana, and then Chris was raring to go at 8:45 (I had thought we were leaving at 9).  I begged five minutes, and fortunately that was enough for the body to get in gear before my full-day journey.

Gave Mum Po a hug, told her I’d see her soon, and we headed out for the walk to the station.  Chris was gracious enough to accompany me since I wasn’t quite sure how to make it to the train station; the most direct route meanders through town.  It was drizzling a bit, but not too bad, and it wasn’t cold.  Less than halfway to the station, the heel on my boot broke loose again.  Really on the start of a ten-day trip?

Chris offered to stop at the shoe repair, but I didn’t want to stress over time, so I said, “No, let’s just go.”  We stopped near the station at a bench along the way to get the glue out from the pocket inside my suitcase, which meant I needed to open it all the way (it is folded like a garment bag that zips all the way around).  It went back together easier than usual – Thank God!  When we got to the station about 9:20 a.m., the ticket line was a mile long with only one window open.  (There had never been a line before, but it was a Monday morning.  I have no sense of time – I’m on vacation!)  Chris bid me farewell with a hug and good wishes (it would be the last time I’d see her until I got back to the States two weeks down the road).  There were a couple of women in line before me who were friendly, which helped pass the time.

When I got to the window, it was the same chap who’d waited on me when I was headed to Paris.  Once again, he asked me to take him with me so I replied “Oh, you again! I’m going to Rome this time.  Is that better?” (He hadn’t been too thrilled about Paris.)  He asked if I was going all the way by train and smiled approvingly when I said that I was then added that he hadn’t been to Rome in several years.  At least this time, I was versed in getting the discounted return (round-trip) ticket for Eurostar riders, so I had everything I needed transportation-wise at that point for most of my ten-day journey.  Now it was just a matter of keeping track of all the individual tickets, and the ones for the Midlands line was just a tiny little stub-like thing, compared to the other ones for the rest of my trains, which were more like old-school airline tickets.  (NOTE: I had purchased my Eurail Pass and many of my seat reservations on other specific segments in advance of my trip to ensure I could make it from one place to another on a tight schedule.  The places where I left flexibility — I had so hoped for more spontaneity — were the places that caused me transportation issues in the end.)

The delay in line was not quite as bad as I thought; I had my tickets by 9:40, giving me enough time to use the restroom one last time and still get a seat on the train, right near the door and luggage spot (both good so I didn’t have to leave my bag unattended at any point), even though there weren’t many seats available (one of many advantages to solo travel).  As soon as I got on the train, I pulled out the glue and got to work on my boot (I only worried about appearances for a second – what’s a gal to do!).  I had kneaded the tube while I was waiting in line, and it came out much better than before (maybe too much so).  Some younger gals next to and across from me were laughing as I went about my business, sharing their stories of similar shoe challenges.  They said they’d used Super Glue, and it had worked well enough to at least get them home.  “Super Glue fixes everything.”  Hopefully the shoe glue holds longer than that (or should I say until I get home too!).  I am a bit concerned, however, because you are supposed to let the glue set for 24 hours before wearing but I didn’t have much of a choice.

The trip to London was uneventful, once I got the glue on the boot, until I got off the train and realized the other boot heel had broken loose (for the first time).  I exited Euston station and sat on my luggage to glue this one before the walk to St. Pancras.  At least I had left early enough to accommodate any glitches!  I had about an hour and a half before the Eurostar departed for Lille, so I sat there on my luggage and had a couple of smokes while I waited for it to at least set a little bit.  The first one had the whole hour-plus on the train from Northampton to settle in.  I took great care with my steps to avoid doing anything that might jar the heels loose as I walked.

As soon as I got to St. Pancras, I relaxed a bit – had another smoke, went to the restroom and decided to check in.  I realized then that there’s a place to smoke on the check-in level, right near the gate.  I decided to have one more (get that nicotine level up before the 2½ hour-journey) and fill out my Eurail Pass for later in the day (kudos to me for remembering!).  I checked in and stopped at the bar for a Stella Artois (4 lb or roughly $6, not bad for a travel hub).  Mmmm…beer for breakfast, just like at the races back home.  Not a bad way to pass the time waiting for the jostling and loading to begin.

I got to Lille with no ‘stumbles’ (pun intended), although it was a tight squeeze on the Eurostar.  I couldn’t even move my legs, which made the trip quite uncomfortable.  It was nice to disembark in Lille.  Once there, I stood outside for a while since I had about an hour and a half before my next train.  It looks like a nice city, at least from here (which was a nice change compared to outside Gare du Nord in Paris).  This area looks more corporate, with a Crowne Plaza and Novotel across the street.  I got a brioche au beurre and macchiato simple (YUM! and only 3 euro or about $4 – a bargain!) at the little coffee counter to help pass the time, not knowing when I would next have a chance to grab a bite.  The next leg of my journey was a three-hour jaunt, with arrival in Lyon not until 8 p.m.