The trip to Lyon was also uneventful, other than a screaming child for part of the journey (never have much tolerance for that, but at least I had my iPod).  And the countryside was incredible — lots of trees, beautiful autumn colors!  Again, not unlike the part of the country I hail from in Michigan.  I don’t know really what I was expecting or how I thought it would be different; I’m not sure I ever really thought about it.  But I know I was pretty amazed that it didn’t seem more “foreign.”

When I got off the train, I wasn’t sure which exit to take out of the station to get to my hotel, and it was a little harder to get my bearings in the dark.  It turns out the one I took was fine; I just couldn’t tell at the time because I couldn’t find the street I had used as the starting point on my directions.  Maybe that was out the other door?  Anyway, I finally spotted a map at the bus stop that indicated I was already on the same street as the hotel and headed in the right direction.  It was only three blocks; I intentionally picked a place near the station since I would be in Lyon for less than 12 hours total.  And, even with the heavy luggage in tow, I didn’t mind the chance to stretch out after so much time on a train.

From the lobby, the Premiere Classe Lyon Centre Gare Part Dieu looked more like a hostel or what I would expect at a low-rent apartment building.  Very plain, very cramped.  The “front desk” was more like a little cube with a tiny window/counter.  I had to wait to check in – guess I wasn’t the only one who wanted an inexpensive room near the station – and there wasn’t much room to maneuver.

I made it through most of the check-in in French even though I was exhausted, verifying the number of nights, number of guests and even adding breakfast to the room.  The clerk’s English was about on a level with my French so, while we had muddled through to this point, it was probably inevitable we would hit a wall.  She kept asking me something else; after two tries, I still had no clue.  There is nothing more frustrating to me than not being able to reach a point of understanding with someone – in my native English, much less a bilingual barrier!  Wee fee?  What could that possibly mean?  I was certain it didn’t have to do with a pay toilet in this circumstance (not that I would’ve expected it to mean that anywhere else either, but I was really grasping for straws at this point).  Luckily, she finally had the “Ah-ha!” moment (one that was clearly escaping me at the time) and said “Wi-Fi”.  Ay caramba!  Really?  All that frustration over Wi-Fi when I was going to be there less than 12 hours?  (Bad Michele!  Forgetting your French vowel sounds?  Madame Kracht would be so disappointed in you.)

I took the teeny, tiny elevator to the third floor and wended my way to the proper room number through the darkened halls, only to find that the room key wouldn’t work – red light, red light, red light.  (Now, I must be honest, I have not been a fan of the card reader entry since I first encountered it many moons ago.  For some reason, me and key cards just don’t get along, so I always try, try and try again to make sure it isn’t me.)  Okay, so back to the teeny, tiny elevator and down to the lobby to resume my stilted interaction.  She seemed convinced I simply hadn’t swiped (hand signals come in handy here) “plus vite” (fast enough).  While I was equally convinced I had, I headed back to the teeny, tiny elevator for another stab at the card reader.  Lo and behold, even though I did it exactly the same way as I had multiple times before, it suddenly worked perfectly!

I opened the door to what was a plain but nice room (especially for 61 euro, or about $82, including breakfast) on the third floor, with a window that opened onto the street.  Now I know what all those comments meant online about small showers in Europe – no wonder they don’t shave their legs!  (How’s that for an old stereotype?)  I opened the window, turned on the TV, got some water (exceptionally thirsty at this point – when was the last time I had anything to drink?), and had a smoke (yes, a smoking room in France!) while I watched the action on the street. 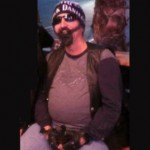 There was what appeared to be a nightclub across the way, with a queue forming (it was about 10 p.m. at this point) and a fair amount of foot traffic heading that way.  It looked like a mass of grown-up trick-or-treaters; everyone was in costume.  I saw a horned devil and a monk making their way to the festivities (no, it did not result in a good-vs-evil battle scene, although it felt like it could).  I had already been feeling a little wistful about missing out on Halloween, my favorite holiday, but then to know I was so close and missing out on the fun… <sigh>  No time to dwell on it though.  With an early morning looming, I got organized, took a quick shower and climbed into bed. 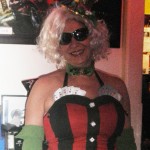 It was a pretty exhausting day, given the rough start and the many hours on trains or in stations:

And tomorrow’s schedule has me a bit anxious.  There’s no room for late trains or any other scheduling mishaps if I want to make my hotel in Milan.  I am exhausted, yet afraid to sleep soundly, lest I mess up the schedule right out of the gate.  An 8:30 a.m. train is an early start for me if I intend to get ready, breakfast, pack up, and check out, then walk to the station and figure out where my train is (every station is so different!).  It took a long time to get to sleep (acting like a fish out of water or a pig on a spit), but I slept well once I did.

← These Boots Weren’t Made for Much!
At Long Last – Switzerland →