A “Gift of Time” & Father Phil 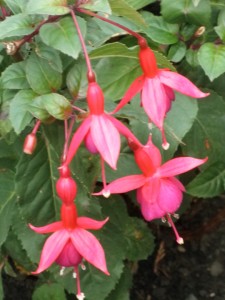 I finally got up at 11 (or so I thought) and started hurrying about so I would be ready by 1 for lunch.  I had my coffee and a smoke in the garden (which finally had the “normal” effect – my digestive system did not adjust easily to the change of time zone), took a shower, and checked the laundry to see if it was dry yet.  (Waiting for things to air dry in a humid environment is an adjustment after living in the desert for 20 years.)  Once I was done, with just a few minutes to spare (I thought), I sat down to organize some things for my trip and Po commented about how I was ready early.  I wasn’t sure how to take that and hoped they hadn’t been waiting on me.  It still didn’t register – right, silly, the time change…

Eventually, it all came together in my foggy brain, and I decided to take advantage of this “gift of time” to do more packing and sorting/organizing for the upcoming journey before we headed out for lunch.  Somewhere along the way, Po asked if I might join her on her weekly outing to the club when I returned from Italy/France, which I agreed to immediately, of course – was honored she would ask, at the same time hoping she wasn’t just being polite.  My “time lapse” also gave me a little time to just relax with Chris and Po and look through some old family photos (including cats past) pretty much from the entirety of Chris’ life.  I truly, deeply enjoyed that chance to walk memory lane and build on the bonds of history with both of them.  I value the insight gained from stories and images bearing witness to the journey that made the person I know who they are today.  Getting to know Po, though, was the best insight I could ever gain into where Chris’ beautiful soul got its foundation.

Chris, Po, Cyril and I headed off to the Bradlaugh for lunch, meeting Mike there.  Father Phil was there again.  He and another guy named Chris, who was going to Thailand soon, joined our table after lunch.  Father Phil bought us a drink as we ventured into a conversation on the U.S., religion and politics (yes, the two taboo topics in an American bar).  Quite an interesting character, having changed religions along the way and having almost died of heart failure fairly recently, as a result of cancer treatment, although he looks quite well now.  He had also spent time in the States – in particular, as he noted repeatedly over my time in Northampton, in Scranton, PA.  Imagine a man in a collar, with a classic Cambridge-educated English accent, drawling (and I do mean drawling) in an exaggerated nasal American accent – “Scraaaan-ton Pennn-syyyyll-vaa-neeee-aaah.”  Father Phil was very direct, asking about various things from religion to my upcoming travels.  He definitely struck me more as a professorial sort committed to inspiring critical thinking than as a priest.  It was refreshing and discomforting at the same time, yet you couldn’t help but like the guy with his sparkling blue eyes and easy mischievous grin.

I stayed after the others to check e-mail, post on Facebook and cancel reservations (Ventimiglia and Paris).  About a half hour later, I got to Po’s.  Mick was supposed to be there at 4:30 to drop off some holiday gifts he wanted Chris to carry back with her, but he was not there yet when I arrived at 4:50.  I headed up to do more packing, charge all my electronics and get fully organized for the big adventure I was off on in the morning.  Mick finally came round about 7 after calling – he’d imbibed a bit in the interim and was a bit wound up and super chatty.  (While he can be a bit over the top when he’s been on the drink, it is always tempered by his heart of gold.)  He offered to take me for a meal and drinks on him upon my return from my journeys.  I told him I appreciated the offer and would let him know if I was up to it.  By the time he took off, I think we were all rather worn out and soon headed up to bed.

This was one of those most precious of times on my trip, where there was nothing really scheduled, the pace was easy, and it was all about the ever-growing comfort zone in the house of Pauline — A welcome comfort to carry with me on the big adventure the next day, with tight timelines and a dependence on everything going right to make it through the schedule I had arranged, knowing I would now be making my way totally on my own, unsure how well I would be able to communicate.  Needless to say, I was feeling more than a bit of anxiety, along with the anticipation of fulfilling the next segment of my dream in the land of the Romans.

← Feeling at Home Across the Pond
These Boots Weren’t Made for Much! →