Return to the “Comfort Zone” 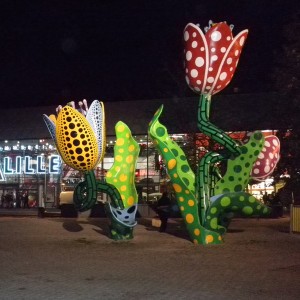 It was an uneventful and comfortable first class trip from Paris to Lille.  The Lille railway staff were very stern for the most part, basically just barking orders or pointing in an obvious anti-English stance.  After being abruptly told where to wait and put my ticket through, there was a bit nicer elderly gent who paid enough attention to realize my paper ticket was not the type that would go through the auto-reader.  He pointed me back to the window, where the rude woman who previously misdirected me awaited to grudgingly assist.

Next step, UK Border Control, with a charming blond cutie manning the station – a welcome relief that brought out the flirty clown in me…HAH!  He asked “Business or Pleashuh?”  Of course, I responded, “Pleashuh.”  He said, “In France too?”  My reply: “Yes. Pleashuh – ALL pleashuh.”  He said: “UK resident?”  Me: “No. U.S.”  With a smirk, he said: “Oh, so you’ve done this loads of times then.” My reply: “No, it’s my first by train.  Does it show on my face?”  He smiled, stamped my passport, and, a little flushed, I was on my way. 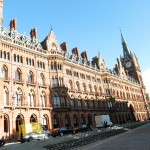 I got back to London without any issues.  The walk from St. Pancras to Euston Station seemed a lot further than it had on my way to Paris – guess I was too busy taking it all in the first time to notice.  I actually thought I might be lost; maybe it was because it was dark now and there were a lot more people on the streets, since it was evening rush hour.  I stopped to take a look down a side street to see if anything looked familiar, and a woman plowed full into me and my cigarette, putting it out on her bag.  Inadvertent retaliation for her lack of attention, perhaps?  I finally came to the Euston station sign and saw the Royal George Pub right across the street (which a bar buddy in Vegas had told me I needed to check out – maybe on my next journey through here, when I don’t have another outing to attend).  Fortunately, there was a train just leaving to Northampton so I had no wait at all. 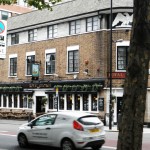 When I was almost to Northampton, I got a text from Chris saying they would leave a map if they left before I got back.  (Mum had a spare key with my name on it when I arrived, so I wouldn’t have to worry about her schedule with my comings and goings.)  It was raining in Northampton when I arrived, and it took a while to get a cab because they are mostly ones you have to pre-book (or call from the airport once you’ve arrived).  I didn’t realize that because it all went smooth without a reservation when we first arrived from the States.

The driver was a funny ol’ chap with only a few teeth, nine children and a tenth on the way (at least according to his story).  I told him there was only one way to fix that and he said no, he liked it too much.  He asked ME which street was Earl St. – I had no idea but described the area well enough that he figured it out.  He said there were a couple similar ones he always got confused or something, but I figure he was just trying to figure out if he could long-haul me.  (There are things you pay more attention to when you’re from a tourist town like Vegas…)  I was even more confident of his motive once we arrived at Mum’s doorstep.  He found her place and pointed it out, then told me the fare was 5.40 pounds.  I hesitated and said I wasn’t prepared for that because the fare had been just 4.40 a few days earlier.  Suddenly, he corrected himself and said he meant to say 4.40.  I still gave him 5 quid (which is a pretty good tip for there) for his “entertainment value” and for ‘fessing up.  Plus, he “loved my accent.”  (Yes, even I am susceptible to flattery at times.)

Chris and Mum were surprised to see me so soon, further proof that the journey had been quite smooth.  I was relieved I didn’t have to try to find the meeting place on my own as it was a different part of Northampton than I’d yet been to.  I actually had about an hour to freshen up, relax and chat about my Paris adventure before we headed off to meet Mick and his crew.

At the appointed time, Chris, Mum, Po and I set off on foot to meet Mick and crew at The Lamplighter (Mike caught up with us along the way).  I have to say, I have really had a hard time adjusting to not being able to walk anywhere at home, after walking just about everywhere I went in Europe, especially in Northampton, or at least having accessible public transportation.  Don’t get me wrong, I’m a Michigan gal, and I love my car…but I also like the healthy, vibrant feeling that comes from an even more personal sort of transportation.  I don’t mind getting exercise (or even notice that I am) when I have a sense of purpose beyond the actual physical activity.  Anyway, I digress (again…).

Upon arrival at the pub, we were greeted by Mick, and I was introduced to Krista and Nigel, as well as greeting Paul (aka “Bahmeh,” perhaps in reference to our current president with whom he shares the distinction of being tall, darker-skinned and well-spoken?), whom I had met on his and Mick’s most recent trip to Las Vegas.  Mick showed us to the bar to get us a beverage (after Nigel, a cheery, outgoing chap, pointed out to me that the “beer is warm here”).  Whilst we were awaiting our bevvies, Mick handed me an envelope, telling me he wanted to be the first to give me a Christmas card.  I was greatly amused that it was addressed to “The Yank Chick – Michelle?”  We found ourselves a seat and studied the menu, while I enjoyed an IPA (Indian Pale Ale).  I opted for nachos, which were a bit different there.  Later, I enjoyed a conversation with Nigel and Paul about warm/cool beer and Belgian flavored beers, which Nigel favors.  He told me they have a much higher alcohol content and came in flavors from fruits to chocolate.  As a result of my interest, he insisted on buying me one next, in the flavor of raspberry.  It was strong and absolutely delish, what I might almost describe as a sparkling beer!

I went out to the little patio area for a smoke – again, a great little outdoor beer garden set-up, plenty of smokers.  When I came back in, Mike had shifted to my chair next to Chris and I chuckled over the thought of asking if I was supposed to sit on his lap, given his very proper and reserved Englishman mien.  But he saw me and moved, subverting my sense of humor for the moment.  Chris’ friend, Mark, showed up, and she was clearly delighted, so they had a bit of a catch-up.  Nigel, Paul, and Krista left soon after, then Mike and Mum Po.  Mick, Chris and I hung a little longer and then shared a cab home. (Mick insisted the area was a bit dodgy and not fit for walking while Chris pooh-poohed him – sounded just like at home, where she rarely notices a dodgy area herself, and you know if she does she needs to be taken seriously.)

Once back at Mum’s, it was already after midnight with an early up for our day trip to London the next day.  Off to bed!