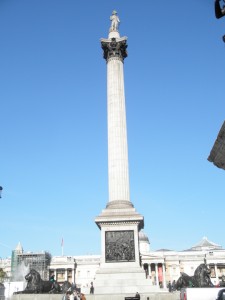 We got up early in the a.m., got ready, had a bite, and headed off for the train station.  (One side note:  My daily morning routine in Northampton was to get up, shower, get ready, fitting in a cup of instant coffee along the way and then having one with a smoke in Mum’s lovely English garden.  It was usually quite peaceful, with a bit of a chill, and a nice way to peacefully gather up for the day ahead.  I’d then head in and have a slice of toast or a banana, with Mum regularly expressing her concern about how little I ate and how it worried her.  This from a woman barely half my size <SMILE>!  I always just told her the truth — I rarely eat in the morning so it was actually quite a lot for me…) 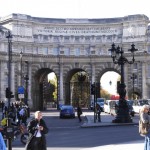 Once at the station, it didn’t take but a few minutes for Chris to realize what I had been talking about with the crowded conditions on my Paris trip, thanks to school break.  We had to stand on the train all the way to London (roughly an hour’s journey).  We arrived at Euston Station then headed to Charing Cross Station on the Tube.  Next, up to street level, walking near the Theater District into Trafalgar Square for a photo session with the fountains, feline statuary and Lord Nelson’s column, and then beyond the square, the Admiralty Arch (where the royal wedding and funeral processions pass in transit to/from Buckingham Palace). 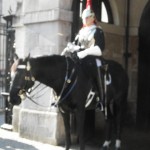 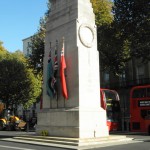 Next, down Whitehall toward Parliament.  Chris pointed out 10 Downing Street (familiar to me from several of my favorite movies), the war memorials (including the Cenotaph) in the middle of the road (which was perfect, given I would later watch the Remembrance Day, like our Veterans’ Day, festivities, which take place there, on the telly with Mum), then the guards mounted on horses (and unfortunately, the photo I took turned out blurry – hard to get a decent photo with the hordes of people milling about and paying no mind). 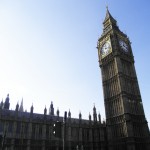 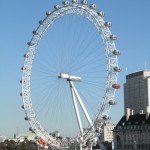 By the time we got near Parliament, Chris was sounding like I had in Paris (except she wasn’t talking to herself, and I probably never said “Bloody Hell!” in regard to the hordes of families on vacation, mobbing the entire city with reckless disregard).  It really was crawling, especially in this well-known area encompassing Big Ben, Westminster, and the London Eye.  It was difficult to get photos because, when the sun broke through the clouds, it seemed it was always behind the object of interest.  Westminster is such a sprawling facility, it is hard to get any kind of representative photo from any perspective (except maybe the sky). 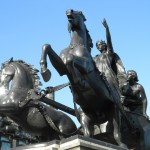 With the crowds, it took quite a bit of effort just to get a photo of the statue of Boadicea near the Westminster Pier (which both Chris and I were trying for).  This is near the point where you both cross the Thames and enter the Embarkment path alongside the near side, close to water level.  This is a really lovely stroll, with various statues and vendors.  I admired and took pictures of the Battle of Britain memorial (quite a large and intricate piece), as well as the main reason for our stroll along the river – Cleopatra’s Needle and the Sphinx replicas.  Let’s just say, this made the Boadicea experience seem mild… 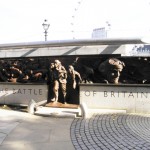 Who knew that businesspeople, families with little children, and everyone in between liked to use these areas for lounging or lunching!  Every time we thought we were going to get a clear shot (i.e., someone finally decided to move on after lingering far longer than expected), someone else would jet in out of nowhere just as we raised our cameras.  And believe me, these were NOT the type of people who realize, even belatedly, that they have disrupted someone’s photo op (or who, if they do, pretend they have no idea there is anyone else but them on the planet).  In fact, one family was so rude and seemingly oblivious, after we’d spent quite some time fruitlessly trying for a photo, we couldn’t help but try to rectify the situation.  Twas all to no avail, as the family perched all over the Sphinx (the one which would put our backs to the sun) continued to organize and rest no matter how loud we commented, first on how we’d like to take a picture and then, louder, how rude some people are.  Hey, Chris started it and I couldn’t leave her hanging out there alone…  It was obvious the crowds were getting the better of both of us by this time. 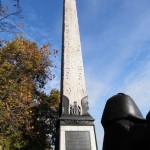 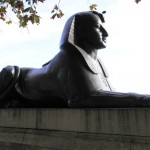 At long last, we got our photos and decided we needed a rest and bite to eat.  We found a quaint little area with a cobbled street, I believe, and stone passages, a hawker selling papers (truly Oliver-esque in my mind), and, most importantly, a Starbucks with little tables outside.  Now that was a much needed treat – nothing calms the nerves like a vente Carmel Machiatto, an overpriced Chicken & Salsa Wrap and a smoke.  Watching the hawker was entertaining to us both, so we were in a bit better (but less than ideal) mental shape when we resumed our journey. 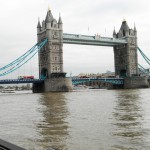 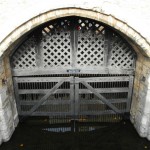 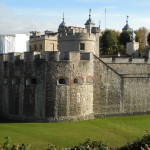 Onward!  We headed off to the Tube’s Embankment entrance in pursuit of Tower Hill.  We walked around the Tower of London, which was something like making your way through a swarm of killer bees, all those children on school break and their cat herder parents.  The line to get in was outrageous, so we just meandered around to the best of our ability, taking various photos of the exterior and grounds (there are shops and food vendors and such), as well as the Tower Bridge in the near distance.  Chris rued missing a peek at the family jewels – oh wait, make that the Crown Jewels – which is one of her favorite London sights, but, at this point, we’d had our fill.  We headed back to Euston on the Tube to head on to Northampton by train. 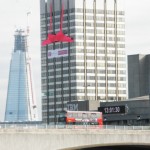 Breast Cancer Awareness Promo, London, England (something for Vegas to think about!)

(In hindsight, I should’ve kept track how much I spent using the pay potties over the course of my three weeks abroad, although it was mainly in London and France.  I bet it would be an eye-popper, even though I did my best to avoid the need.  It’s almost like an exciting find on a scavenger hunt when you can stumble upon a free toilet!)

Upon our return to Mum’s, we recounted the basics of our day and then prepared for our curry outing (knew we’d have one of those since one of the things I always hear from the Brits is you just can’t get a decent curry in Vegas) with some of Chris’ other longtime friends, Pat and Wayne.  Chris, Mum Po and I headed off (by foot, of course) to the restaurant, with Po pointing out various points of interest along the way.  When we arrived, it seemed the staff knew we were coming, as Pat and Wayne are apparently regular clientele.  I was quite pleased to finally meet them; Chris mentions them quite often, about what a nice relationship they have, that they do their own things but also are very well-traveled together, to often quite exotic locales.  Sounds pretty great to me!  So, anyway, they are even more charming, inclusive, generous, and fun than I could have imagined.  Made me feel very welcome and inspired me with tales of their journeys and the people they encounter along the way.

And I thoroughly enjoyed the cuisine – my first real experience with Indian dining.  Chris had invited me for a home-cooked curry once – closest I’d had.  This time Chicken Chilli Masala, a spicy dish I truly enjoyed, especially offset by breads and other shared samples and some lovely wine to top it off.  Another awesome touch to the evening was that one of the owners, knowing Pat and Wayne, came over to chat and took an instant liking to Mum (of course – who wouldn’t???).  Turns out, he lived very close to Mum and Chris as a child, so they walked a bit of memory lane.  Now, he is a barrister in London and comes to help out at the restaurant in Northampton on the weekends.  He took good care of us and spent quite a lot of time visiting with us over the course of the night.  One more charming and welcoming conversationalist in a crowd of several – always welcome company in my world – and he was a rather creative thinker, which put an interesting twist on things.  Overall, a great night of relaxation, laughter, and positive energy at Maharaja – the perfect way to unwind after the trials and tribulations of the big city earlier in the day…

Then, hugs and good wishes and sincere “nice to meet you’s” before setting off on the journey back to Mum’s so we can get some rest before heading to the first hunt of the season with Michael in the morning.  (NOTE: Chris recently returned from visiting Mum, bringing with her best wishes from Pat and Wayne, Mum, Michael and Bronwen.  Brings a smile to my face, sharing and reflecting on so many fond memories…) 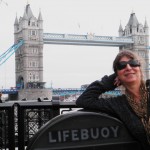 Me, A Lifebuoy, and the Tower Bridge, London, England

One last thought before closing this day’s tale:  At first, it struck me as odd how little I wrote during my time in Northampton while my time there felt so full – but, after time to reflect, maybe not so odd.  There’s just no getting around it… I was too busy living it and enjoying the company of those around me to find time to write.  And, while I might wish all the fun I had there was a bit better documented, I do not regret that I was so enjoying myself living in the moment, relaxing and basking in the warmth and welcome of the people around me and all the wonderful outings they offered me.  It was so rejuvenating, which I sorely needed after the trials and tribulations of my unsettled life in Las Vegas at the time.

← Return to the “Comfort Zone”
Hounds, Kegels, & A Princess Place →