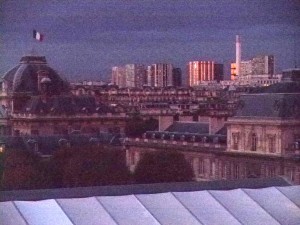 Well, I hardly slept and ended up getting up at eight instead of six like I wanted (and it’s still dark at eight!).  So I guess Saint Sulpice/Pantheon/Sorbonne will have to wait along with Montmartre, Moulin Rouge and Sacre Coeur.  Maybe on the way back from the French Riviera…  As I result, I took my time getting ready.  I returned the adapter to the desk about 9:30 a.m. and went down to breakfast.  My plan is to hit an ATM and then head up to the train station.  Debating if I should try to swing by Sacre Coeur on the way?  Guess it will depend on how the bag feels in terms of slogging around town with it.  More pain au chocolat, a mini-baguette with fromage (cheese), banana and café.  Then across the street to the bank since it’s on the VISA ATM list.  There was no info posted on the ATM fee that would be charged and nothing was shown on the receipt; hopefully, there won’t be a big shock when I check online next chance I get.  I got 300 euro, which should last me through my travel to Rome next week, with a 1% transaction fee and $2 ATM fee from Nevada State Bank for a total of $426.20 plus any fee charged by BNB Parabas for the ATM withdrawal. (UPDATE:  Good news!  There was NO fee for using the ATM – NICE!  Overall, the cost to get funds out of an ATM in Europe was hardly more than using one in a bar in Vegas for my local currency.) 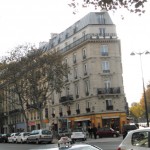 I checked out of the hotel (250 euro or roughly $164/night, including 3 hours of Internet and two breakfasts — reasonable by Paris standards, for sure) and made the short walk to the Metro entrance – it just wasn’t the RIGHT entrance – OOPS!  Turns out I took the Metro the wrong way from Ecole Militaire. (Guess I was just lucky the other times I rode because I actually never even thought about that and always ended up where I thought I was going each time.  Good thing I didn’t try to squeeze anything else in as far as sightseeing so I had a little extra time before I needed to be at the station – no stress for me!)  It was only five stops to the end of the line, so I just rode along, got off at the end, went up to street level and back down to go the other direction.  And, I learned something – look for the endpoint before you go in so you know you are headed the right direction.

I still got to Gare du Nord (the hellhole) two hours early.  Je deteste Gare du Nord!  (I HATE, HATE, HATE IT!)  The scammers and beggars are everywhere, and the workers are not helpful at all.  I hate even standing outside for a smoke because you are constantly being approached by questionable sorts.  Definitely put my experiences with the “Wedding Band Scammers” in perspective – not so bad after all.  In retrospect, I do find it odd that the Champ de Mars was well patrolled, yet there was no visible presence of any sort of law enforcement near the Place de la Concorde or the train station, also tourist-heavy areas.  Guess that might explain why scammers were rampant in certain areas and not others…

The up side, through all these ‘adventures’, was that I really wasn’t worried about anyone getting anything valuable from me – be it the train station scammers or the wedding band gypsies.  I had a small purse to carry my smokes, lipstick, a few euros, and snacks primarily.  Anything valuable was on my body, under layers of clothing, split into two different travel pouches.  The tri-fold one hung around my neck and nestled near my cleavage under various layers and held things I would (or might) need during that day’s journey (e.g., Eurail pass/train ticket for the day I was traveling, passport).  The zippered one strapped around my waist, inside my waist band, held my traveler’s checks, the bulk of my cash, my credit/ATM cards, and my train tickets for future days.

Anyway, I quickly realized, through observation, that the scammers at the train station like to target English speakers for their antics.  I didn’t have to be a brain surgeon to realize that, going forward, I just didn’t understand English!  If they tried to speak to me, I would ignore them.  If they were persistent in trying to get my attention, speaking English, I would simply look at them like they were crazy for talking to me in English, shrug them off and go back to whatever I was doing at the time.  Funny, after several attempts from different people in quick succession, I had no further troubles during my long wait at the station.  Seems word travels fast…  One of the favored scams here was to ask people to sign a petition for some heart-wrenching cause – sometimes the scammers pretended to be mute, for example, and gathering money for a cause for the disabled.  If someone agreed to sign their petition, they would then be pressured to donate, basically in exchange for “the privilege of signing.”

I was waiting as long as I could to go to the restroom, to minimize the “potty toll” and chances of having to go on the train.  When I was getting near the urgent point, I went and found the facilities and just stood along the wall to kill a little more time.  A woman who had been standing in the middle of the hall came over next to me and, in American, said something about feeling she was in the way in the middle and something just made her think she should come stand next to me.  I replied that I felt in the way even if I stood against the wall, and the ice was broken (I think she was actually overjoyed because I spoke American).

Mitzi (and her husband, Fernando) had just arrived in Paris for the first time from the Los Angeles area and were trying to figure out the Metro.  Mitzi told me I was the second woman traveling solo they had met (the other was a young gal) and she just thought that was so cool (and so scary at the same time).  She got Fernando’s attention and called him over, after telling me how happy he would be to talk to me, that me explaining would be a big help, because he was feeling pretty stressed out about all of it and trying to get to their hotel.  I asked a few diagnostic questions – how long they were staying, where they were headed, etc., and then suggested the same three-day pass I had purchased.  Fernando thanked me and headed over to purchase the passes.  When he returned, I asked if they had given him a map of the Metro lines and they had not.  I had the one the gal gave me when I purchased a pass (I had used a better one I received at the hotel) and passed it on to them, all fresh and new.  I talked to them about the lines it would take to get to their hotel and taught them my new lesson of the day – to look for the endpoint on a line to determine the right direction.  They were so grateful – just obviously warm-hearted, fun people.  They said they love Vegas and come there a lot so maybe we’ll run into each other some time.  Now THAT would be a trip (given that I don’t go anywhere near the tourists 99.99% of the time)!  Anyway, I hope I told them enough.  It was nice to be able to use all my research to help someone else as well as myself.  But I probably should have mentioned the gold ring scam, if only I’d thought of it at the time.

By then, it was 1 pm, and I really had to use the facilities (which made the .70 euro more worth it, if you know what I mean).  Of course, you never really know how the pay toilets are going to work – sometimes there’s an attendant taking money, sometimes it’s automated and only takes certain coins, sometimes there are machines that will make change, sometimes there aren’t, and sometimes they will direct you through the men’s to get to the women’s (yeah, now that’s an experience I haven’t had before – then again, pay toilets themselves were new).  In this particular case, a grumpy older black woman seemed to be the attendant, but certainly was not too interested in doing the job.  You’d think I was the only one who ever was clueless with a pay WC.  I wasn’t sure how to work the meter and didn’t have the correct change.  I practically had to beg to change 2 .05’s for the .10 euro coin the meter would take.  And I got some serious attitude when I didn’t understand her saying “a haut” – the top – the first couple of times (as opposed to “a bas” – the bottom — I finally realized) for the correct slots to use, irritating her to no end.

When I came out of the restroom, I went out to have a last smoke before the trip.  All of a sudden, a tall black man ran into the doors of the station further down the building and then three others followed him in yelling, “voleur, voleur, voleur.”  (Strangely enough, I had been looking at my phrase book in the last 24 hours and happened to see that exact phrase or I would have had no idea there was a thief in the vicinity).   It seemed like they had all been chatting and walking together and that they just realized they’d been taken in when he started running.  It created quite a stir – almost instant sirens and police.  Not sure if they ever caught the guy, although inside the station was swarming for a while.

At this point, I am as grateful for meeting Mitzi and Fernando as they were for meeting me – the high point in the misery of Gare du Nord.  A little relieved to be heading back to Northampton to my English-speaking “family,” but sorry I had not seen as much in Paris as I had hoped.  Another unforeseen circumstance of the unexpected school break – trains and hotels were hard to come by, and I had to keep to the original schedule I planned months in advance, which was supposed to just be a starting point.  Who knew how difficult spontaneity would be!  In planning my trip, I believed I had thought of everything and was fully prepared.  My goal was to leave as much room for spontaneous adventure as I comfortably could.  In reality, I was even closer than I would have hoped to being fully prepared…I just never even considered there would be a school break that time of year.  Note to self for future journeys!