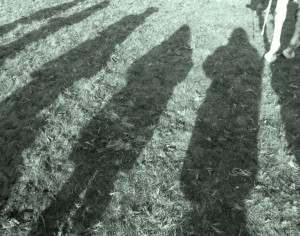 Aaah, a new day and one I’ve particularly been looking forward to…the chance to go to opening day of the traditional hunt in the English countryside.  I got up and went through the daily routine – coffee, smoke in the garden, quick bite of breakfast.  Chris and I headed out with Mike about 10 a.m. for the hunt at an estate about 20 minutes outside Northampton, which we reached after heading through the country on some very narrow country roads.  It was an incredible fall day, and the English countryside was beautiful – and so authentic…brisk, muddy, with the pungent aroma of horse dung hanging over the horizon.  With the muddy conditions, Mike loaned me his Wellies (chivalry is NOT dead – given his oxfords were no better suited for a muddy stroll!) and long coat.  I felt (and, having seen the photos, looked) like a little kid playing dress-up HAH! 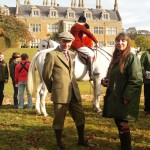 Mike and Michele at the Opening Hunt 2011

We ambled up the pathway to the open wooded hills behind the manor, where a sizeable crowd had assembled, consisting of the spectators, the riders, the horses and the hounds (along with a few other poochies wreaking a bit of havoc).  We milled about taking it all in and snapping more than a few photos along the way, sharing laughs as the hounds “misbehaved” in their excitement until wrangled by their masters on horseback.  The riding outfits were quite elaborate, especially those of the “ladies” perched side-saddle on their mounts.  Eventually, the hunt was on – and the traditionally attired “hunters” charged off into the distance with the hounds and their excitement audible for quite a distance.  My understanding is that they now use licorice (or something of the sort) to intrigue the hounds and at the same time ensure a humane hunt, with no live game injured during the festivities. 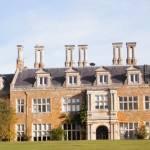 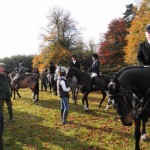 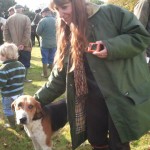 Me Getting Friendly with A Pretty Pooch Pre-Hunt

Strolling around the grounds a bit, we catch glimpses of the hunt here and there from afar and generally enjoy the autumn countryside.  Just one not so tiny problem…my bladder was about to burst by the time they set off, so it doesn’t take long until I am simply unable to take it anymore.  Dropping trou at an English estate didn’t seem appropriate (and the attire would’ve made the very effort more than cumbersome), so eventually I had to let my level of discomfort be known and ask for any recommended solution, while vigorously squeezing the “Kegels” and hoping the solution would reveal itself before an accident befell me. 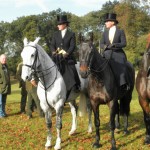 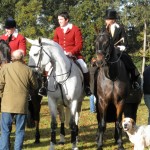 Preparing for the Hunt to Begin

Quickly, we scurried back down the long (and I mean ‘like an eternity’ long) lane to Mike’s car and then headed off through the countryside in search of a facility in one of the tiny villages, although my valiant guide was not certain anything public would be open yet on a Saturday (i.e., before noon). 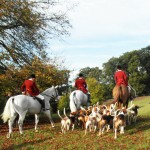 The Hunt Is About to Begin! 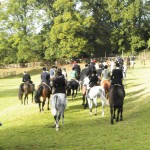 The Hunt Is About to Start 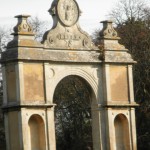 Finally, we pulled into the lot of an inn amongst some country houses, fingers crossed that it was open.  (The “Kegels” had had an extended workout by this time and were ready for a break!)  Yes!  Victory!  We walked in the door and, even in my urgent state, I noticed it was like walking through a window in time.  The Red Lion Inn was a charming place with six rooms, a bar/restaurant, a cottage, and a cooking school.  (No, I did not pick all this up right away – only after I found the ladies’ room and took care of business.)  We got a drink and chatted a bit with the bartender about the place; he was quite friendly, and we were the only ones there at this early hour.  I even picked up a business card, thinking how absolutely charming it would be to come stay some place like this for a bit, maybe do some writing. 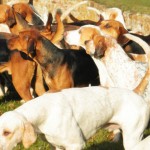 Hounds Up Close & Personal Before the Hunt 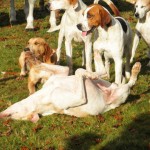 Hounds Pre-Hunt (Is that a horizontal Snoopy happy dance impression?) 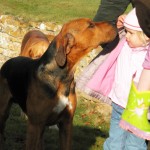 With the pressure relieved, there was time for a bit of leisure (“leh’-zuhr”).  Mike took us on a lovely drive through the countryside in search of something, I wasn’t quite sure what.  Eventually we arrived at the destination – Althorp, the Spencer estate (as in Princess Di and family).  Mentioning that my mom had always been quite fascinated by Princess Diana, Chris filled me in on some details, for example, that the estate was shown during her funeral (she is buried there).  The estate was closed (it is open at times, for limited hours), but I got a few photos to share with Mumsie back in the States. 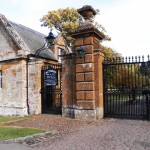 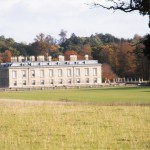 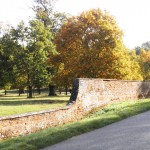 After that, it was back to Northampton to gather Mum and head to the Bradlaugh for lunch (I finally managed to maneuver it to be my treat, not even 30 lb for us all). I had cod goujons with green slaw and chips, checked e-mail – got Jan’s cell number to try to connect with her during the day or two she would still be in Vegas when I got back, a confirmation from Nicole regarding my stay in southern France, and love from Mom (but still nothing from Bruce – ODD).  I was introduced to Father Phil, an apparent regular at the Bradlaugh, who everyone seemed to know and be drawn to (more on him later). 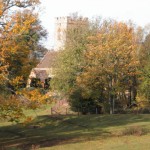 Then back to Mum Po’s to do laundry (and spread it out for drying, between the clothesline in the garden and the hanging rack in the front room) and organize my stuff for the long journey to Rome, before our evening rendezvous with Chris’ friends, Val and Ted (whom I had met once briefly in Vegas when they’d just arrived in town).

← London & Curry with Chris
Feeling at Home Across the Pond →