The alarms on my iPod and phone worked, drawing me out of my “sleep of the exhausted.” Whew!  I got up and looked out the window and was amazed, at 6 a.m., to see a steady stream of costumed revelers just leaving the nightclub.  Drat!  That must’ve been some party!

I had showered on arrival the night before, so I just got up, washed up, and did my make-up so I could fasten up the suitcase before breakfast.  As I am packing up, I realize my cell phone holder (or perhaps “holster”) is not attached to my bag like it was.  Yikes!  The clip is completely gone!  So glad I noticed – I was just beginning the part of the journey where I most wanted/needed to have a phone with me.  It was just the clip that was missing, so I put the two straps around the strap of my purse and tied them.  I will need to keep checking to be sure it doesn’t come loose. 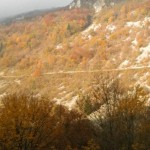 Breakfast consisted of toasted bread, a croissant and a piece of baguette, all with butter and coffee, after which I headed back to the room and lit a smoke.  The digestive system is finally “remembering” its routine, good news with another long day of travel ahead.  But then, something just doesn’t feel right.  What?  How can this be?  I put my panties on sideways when I got up and didn’t realize until now?  How ridiculous is that?  (This is what happens when I have to dress half-conscious, I guess.)  Hope I pay better attention the rest of the day!

Anyway, I quickly remedy the problem, get bundled up, scoot downstairs to check out and head out to the train station.  So far, so good.  The train is much like the London Midland (local line) trains in England, so it doesn’t seem too unfamiliar.  The train I am boarding, however, is splitting, with part going to Geneve (where I was headed) and the other part headed to Evian des Bains, so I have to be sure I am in the right part of the train.  I am not sure how I would have realized or accomplished this without understanding some French; “avant pour Geneve” (or front for Geneve).  I have enough doubt as it is, questioning whether I am understanding correctly.  I wouldn’t be too concerned if I didn’t have such a tight time schedule.  But, after waiting over 30 years to make it to Switzerland, I am also anxious to actually get there.  As it turns out, I didn’t totally trust myself as to which cars actually qualified as “avant,” so I asked the train host to be sure what I thought was front was in fact front.  It was…and these trains actually display the destination so you can confirm!  (Note to other trains I traveled on – think about installing this handy feature…) 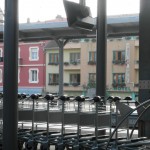 Once the train left the station, the ticket taker came around.  He gets to me and very nicely points out that my ticket is first class and that I can move there if I want (I think he really thought I would want to).  Heck!  I’m just happy I found the right cars for Geneve (although I won’t be 100% confident until I arrive) and, once situated, especially in an almost deserted car with a spacious jumper seat near the door and large window, I am hardly inclined to tote everything in search of an uncertain destination.  Not to mention the nearby door would allow me the quick exit I thought I might need with only 20 minutes between trains in Geneve.  Besides, second class really only seems second class if it is overcrowded.  Otherwise, there isn’t much difference, at least on the local line trains.  (Chris had pointed this out to me in England, and I found it true elsewhere as well.) 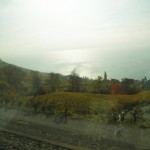 Shortly after leaving the station, we are back in the beautiful countryside, which becomes increasingly hilly heading into the Alps, with more spectacular fall color.  The train arrives on time in Geneve, so it’s no problem making the 20 minute train change.  In fact, I am on the platform waiting when the train ahead of mine took off.

Geneve to Bern is a trip of awesomely spectacular beauty – just like I had always imagined since the Heidi days of my youth (and The Sound of Music as well – as a rather isolated American child, I didn’t make the distinction with Austria).  Swiss chalets, green hilly fields filled with cow farms and deer, villages high over the hills, crystalline lakes and river/creeks, all framed by intense fall colors, visible even through the enveloping mist of low-lying clouds.  The elevated view from the second level of the train only enhances the perspective. 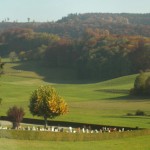 Graveyard in the Swiss Countryside – Switzerland by Train

I feeling grateful for the enthralling views because the train experience itself leaves something to be desired.  The loo is horrid, very different than any others I’d encountered.  And, as much as I want to get out of there in a hurry, I can’t figure out how to flush the toilet or use the water.  At long last, the toilet does at least flush, although I never could figure out why or how.  And I am grossed out not being able to wash before leaving that wretched environment.

Then, the ticket taker is most unpleasant, nothing like the kind and gentle accommodating fellow on the train from Lyon to Geneve.  Every ticket person seems to handle things differently on almost every train.  Some come around right away, some wait so long into the journey, you’re almost certain they aren’t even going to bother.  (There were actually times on the local lines where people got on and off at tiny stops a short distance apart without being checked – maybe you don’t need to pay?  That would be hard to imagine.)  Some ticket takers barely look at the ticket, some study them intently.  Up until this point, I hadn’t ever had to display my Eurail Pass on the train.  The ticket or reserved seat confirmation had always been enough.  But, as I mentioned, every ticket taker is different, and some seem to be very unhappy people. 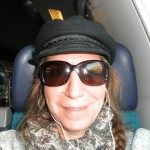 This particular ogre is very abrupt and “demands” my ticket.  I hand him my seat reservation, thinking that is all that’s needed until he growls, “Reservation is not enough.”  So, I say, “Eurail Pass,” and he replies, “OK” almost with disgust.  It’s hard telling with some of these guys what the source of their irritation is.  In this case, I think he was hassling me first because he thought I didn’t belong and then realized I probably did but I was an irritating American tourist!  It wouldn’t be the last time I was hassled by a ticket taker (in fact, this incident will be mild by comparison) for what I believe was a discrimination of sorts – I’m just not sure if it was that I was American or because I did not reflect the proper image for first class.  I tend toward the latter, given that I was so often mistaken for Italian in my journeys.  Perhaps they thought I was a gypsy… At least I didn’t have that problem again on this particular day, since the rest of my seats were second class.  But that presents its own set of challenges (more on this later).

With the ticketing issue resolved, the rest of the trip to Bern passes peacefully, listening to the iPod and reveling in the scenery.  I am a bit surprised upon arriving in Bern.  The “station” is actually a platform with a large number of tracks and multi-levels with random arrival/departure boards scattered about (which appear to list different arrivals and departures), no noticeable staff presence and no readily observable station/building – meaning no restrooms, no food, and no one to inquire of.  Everyone seems to just come and go directly to the outdoor platforms (although Wikipedia has a page for the Bern station with an included shopping mall – guess I wasn’t meant to see it).  This isn’t too big of a problem because this stop, unlike some, is clearly in the central area of town, right near the UNESCO Heritage Old Town Site, instead of a sketchy outpost.  It’s at the top of the hill, so I head down in search of some refreshment.  The city is absolutely bustling, with many people milling about and casually lounging, perhaps because it’s about 12:30 in the afternoon.

There is a Starbucks at the base of the hill, and a frappuccino will suit me just fine right about now, even though my first thought is, “Geesh, Starbucks is expensive everywhere…wonder what that translates to in Switzerland.”  (FYI, it translated into 16 Swiss franc, or roughly $16, for a frappucino and a bagel sandwich.)  I am wondering how difficult the transaction will be, given that Bern is in the primarily German-speaking area of Switzerland.  I am hoping for the best given that the country’s official languages also include French and Italian and most Swiss I know also speak very good English.  Of all places, this is the one where I expected I might create some confusion.  My appearance more Italian, my name French, and then, so American when I open my mouth – HAH!  The transaction does not disappoint in terms of amusement value.

This Starbucks is busier even than most, so I have time in line to select a bite to eat before placing my order.  I settle on a Turkey and Cheese Basil (Bagel).  Suddenly, it occurs to me that I am not carrying any Swiss Francs (Switzerland does not participate in the Eurozone).  I figure they might still take Euros, although it would probably not work in my favor if they did.  I decide to use my MasterCard, since I am virtually certain it will be accepted and the fees are minimal for charges in a foreign country.  When I reach the counter, the clerk greets me in German so I respond in English to see if that works.  As it turns out, she speaks fine English…until I hand her my credit card, at which point she suddenly switches to French.  Ah, yes.  There’s the confusion I was expecting!

I am able to find a small table near the window so I sit down, eat and write this part of the story, enjoying the bustling atmosphere and the mix of eclectic music coming through the speakers; it starts with disco then works back to big band and before, then transitions to French torch singers and crooners.  The sun finally comes out, and the sky turns a brilliant blue.  Hopefully it will stay like this so I can at least get some photos when the train is moving slower – then again, this is the Alps…

So far, I think I like Switzerland best of all in terms of my travel on the continent, but then I always suspected I would.  I may be the only person on the planet who learned French because she wanted to go to Switzerland and who turned down an opportunity to go to Paris as a teenager as a result.  I can only imagine how much Mom would love the scenery here.  Maybe I should tranquilize and kidnap her for a trip when she hits the Lotto – HA, HA!  Here I am working on ways to spend her winnings, when she’s already got that all figured out, just in case.  Doesn’t surprise me a bit that I like the priciest place best – I’ve always had expensive tastes; I’m just too frugal to act on them!