Beat Up by the Boots & 2nd Class Trains 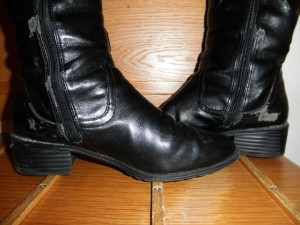 Creating Tales to Tell – The Oft-Offending (Yet Oh So Comfortable!) “Warrior Boots”

When I finish my frap and my jotting, I decide to head back up the hill since it’s moving toward departure time.  And then, the warrior boots strike again!  I have only just left the Starbucks and the left heel breaks loose again.  So I nurse it all the way up the hill and try to find a place where I can sit to apply the glue (which I was now carrying in a more convenient location, just in case), given the apparent lack of a station (to me, at least).

I find a ledge, plant myself and begin to knead the tube to soften it, since that had worked the day before.  (Gosh, was that really just yesterday?)  When I go to put the glue on the boot, it will hardly come out and then, without warning, the end of the tube blows out, covering my left hand (yes, my primary hand) with glue.  I put what I can on the boot and just hope it will hold, because now I have a more immediate problem.  I squeeze the end of the tube back together as best I can, but glue keeps coming out.  I wipe my hand on an extra Starbucks napkin I had (fortunately) brought along and then wrap it around the end of the tube.  I hope it doesn’t dry out, but it won’t really matter if the boots will just hold.

By this point, my hand is practically stuck together – maybe it should be called “skin glue” instead of “shoe glue” (or whatever it is actually called).  With one hand, I struggle to get a wet wipe out of my purse, only to find that it has dried out – completely.  It is at least rough enough to get some of the glue off my hand but it is still really sticking together.  Unable to locate a facility of any kind and with departure time drawing ever nearer, I have no choice but to resort to the old spit and polish method (wiping my hands on my jeans) to make the stickiness at least somewhat manageable until I can at least get to a restroom on the train or at the next station. But trust me, this glue does not go easily, no matter what you try.  There is a guy washing windows and, when he hangs his bottle of window cleaner on some scaffolding, I have more than a passing thought about trying some on my hand.  But then I decide I am better off taking my chances – what if it contains an ingredient that reacts with the glue and does some real damage (or I get arrested for theft)?  I am really, really ready, right this moment, to just give up and go home!  Instead, I head off to the display boards. 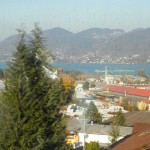 The platform for my train displays plenty early, and I find the correct location with no problem.  Now start the second-class challenges of Switzerland train travel (I didn’t have the problem anywhere else).  I board the train, with my seat reservation in hand, and find an older couple in my row.  The man is in my window seat and refuses to move, even when his wife tells him after she sees me look at my ticket then at the seat number multiple times.  He, of course, will only speak German when I try to tell him I want the window.  (I paid for a reservation so I would have a seat, but I bought the seat as early as possible so I could secure a window to see the scenery, for Pete’s sake!).  AAAARGH!  I am starting to really favor America (and England, from what I can tell), but that’s probably because it’s harder for someone to pretend they don’t understand you or don’t speak your language.  Back to that frustration of mine with not understanding or being understood…  Maybe I should’ve tried sign language <wink>.  I would love to give him a piece of my mind, even though that’s normally not the way I roll in this type of situation.  I know, thought, that my emotion has as much to do with the frustration of losing use of my primary hand (stuck by glue) and my faith in my boots as it does with him – just one thing on top of another right now. 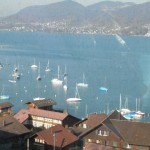 Side note:  Shortly outside Bern, I notice there is a Hooters in Thun, a town of just over 40,000.  You have got to be kidding me!  Talk about incongruity – the idyllic Swiss mountain regions encroached on by American commercialism??

Back to the train situation… I am relieved when, after a stop or two, several people disembark, freeing up a set of window seats facing the way we were heading.  I quickly capitalize on the opportunity, enjoying having the seating “quasi-compartment” all to myself after the discomfort with the older folks.  I figure I will take advantage of it as long as I can, until someone else claims a seat there (which they never did).  The scenery is just incredible, at least what I can see of it.  At this point, you are well into the mountains and much of the travel is through tunnels. 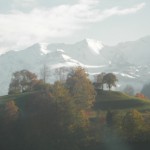 The train arrives in Brig, and I learn that my train to Milan is leaving from the same platform.  This should have made it easy, but no such luck.  How was I to know that taking a second-class car from Brig to Milan was going to be a lot like riding in a loaded cattle car or, worse yet, like a Who concert.  I feel lucky just to survive boarding.

Then I am once again confronted with the lack of respect for seat reservations in Switzerland.  My understanding of how it is supposed to work is that you don’t have to reserve a seat for second class, but you can to ensure yourself a seat.  Obviously, I am the only one on the planet aware of this, and no local would ever waste their money on such a thing (which I wouldn’t either if I were making the trip daily for work, as I suspect many of them were).  The only rule anyone recognizes is, “if your butt’s in the seat, it’s yours.”  Given all the challenges I had faced – my boot, my still sticky hand, my previous issue with my seat reservation, and the crush to just get on the train – I had had my fill by this time.  Maybe this is how destiny (or maybe my budget-focused subconscious) is going about persuading me Switzerland is NOT my favorite place. 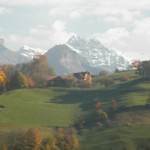 I am one of the first in the door to Car 4, yet the luggage rack is already completely full.  The train is completely jam-packed, worse than sardines, surely a safety violation.  There is luggage everywhere, and I have to really work to get through the aisle to where my reserved seat is located, at the complete opposite end of the car (yes, the very last row).  Upon arrival, I find the row already full.  I try to ask five different people to verify I’m in Car 4, even holding up fingers, and no one can “understand” me.  I finally pull out my ticket and show it to the people.  The older lady in the aisle seat says, “Prego” (~ok) and gets up after the guy in front of me confirmed my seat was in that row.  I tap the girl in my seat and point to my ticket and the placard saying 102 Fenestre (window), and she moves with a scowl.  My bag won’t fit overhead (the same guy who had confirmed my seat even tried to help), but it fits behind my seat in the end, although it keeps bumping on his in the aisle.  The older lady stands in the aisle and glowers at me the whole time, obviously bitching to the gal (who had been in my seat) that she has to stand for two hours.  Why shouldn’t the girl (who had moved to the old lady’s seat) give up her seat?  I paid good money for mine!  ($37, in fact, for 2nd class, when the other trains were roughly $11 to $14, even for 1st!) 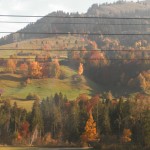 After we get rolling, they come on the speaker and apologize for overselling the train.  (Really??  Hadn’t noticed…NOT!)  There are quite a few people standing in the aisles, it’s hotter than Hades and it stinks to high Heaven.  And now the seat is getting smaller as the chick next to me crowds me with her elbow.  It’s gonna be a long two hours… Really?  Now this chick’s phone keeps flashing a glare and blinding me, and there’s a baby screaming to boot!  (Note to self:  Make future Swiss travel plans dependent on availability of First Class!)  I can only hope that most Italians are like the helpful guy and not like the other travelers (Please, Spirit, Please).

Bottom line, it’s a good thing I brought journals with me so I can let it all out or I’d probably blow a gasket with no one to talk to in my native tongue!  Now I remember why I love the solitude of home J (And here I thought it was just a reprieve from the D’s scene…)

The younger gal finally gives up her seat to the older lady at the first stop, so I end up with a bit more space and no more glaring, since the woman promptly dozes off.  OK, now that things are chilling out and I got it all off my chest (in my journal), I can try to tune it all out and focus on the scenery.  First, Domodossola – a nice, old town, then on to Stresa, on Lake Maggiore, where, just outside the town, are awesome houses and an old castle on an island – absolutely stunning, all of it. 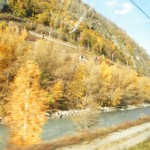 At last, the train arrives at the Milan station.  The gal who gave up her seat has been in the aisle blocking traffic for quite some time before the station.  I begin wondering if I will be permanently confined to this putrid environment.  The nice guy keeps with his nature and lets me out so I can at least get my bag out of the way from behind the seat, since the younger gal’s bag had been the only thing blocking it.  My intuition guides me to my hotel (actually the directions I wrote out helped, but, once again, it’s hard to get my bearings at first).  There is a strange convergence of streets in the area, and it’s kind of hard to make out what’s what.  I just kind of head in the general direction I think is right and, voila, the hotel appears.  From the station, cross the street, go a little to the right, then up and around the McDonald’s (yes, a guiding landmark even in Milan) to the left and down a way on the left is the Idea Hotel Milano Centrale.

I’m definitely ready to relax.  It’s been a long journey:

← At Long Last – Switzerland
Scenes from A Milano Sidewalk →