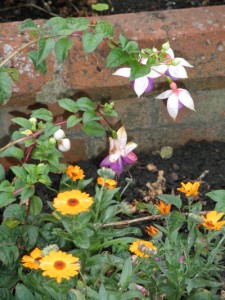 Got up feeling remarkably well-rested and raring to go – YAY!!  Chris and I walked to the town center in search of shoe glue (to fix what would come to be known as the warrior boots), lighters, and various other sundry items.  We stopped in at Marks & Spencer for a look-see, which was quite a treat for me having taken a food marketing course in my MBA program ever so long ago that spent much time on the fine fresh foods marketing in this UK chain, long before it was common stateside. 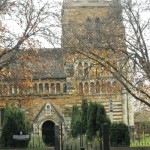 We went back to Mum’s to meet up with the lunch bunch (Michael, Mum Po & Cyril, Po’s “friend”) and headed to the Gala Casino, where I became a member in order to enter.  Funny, I am not a member at any casino in Vegas…  Small place, rather like an upscale version of a Henderson neighborhood casino, with a very nice, classic-style restaurant, piano music playing, etc.  I went out on a limb and ordered Seafood Cocktail for an appetizer (first time eating mussels, so sticking with the theme of new experiences), followed by Beef with Yorkshire Pudding, Roasted Potatoes and Carrots for the entrée (a classic Sunday dinner in England – there are usually only a few choices), and Lemon Syllabub for dessert (described on AllRecipes.com as “a deliciously light, creamy, sophisticated little dessert from days gone by”).  You always hear that the portions are so much smaller overseas, but they still were more than enough for me since I usually eat in small doses and rarely eat out at home.

Barely able to move after all that, we headed up to see the casino – quite a difference from the Vegas kind.  Video poker is NOT a thing here, but many table-type games are found on machines here, unlike at home.  There were a few tables – craps perhaps, not sure about cards and roulette even.  Had a Guiness (as if I weren’t full enough!).  Michael and Mum are known well at this establishment, so we were treated like special guests (especially the two of us from the US, which became a standard throughout our stay).

Everyone in Northampton was so charming and kind, it made things even more special.  I have never felt more welcome anywhere in all my life.)  I got to know Mum a bit when she had come to the States earlier in the year with Bronwen (friend to she and Chris); we all watched the Royal Wedding together in the wee hours and had a barbeque just before the Osama bin Laden’s compound raid was announced.  (More on Mum Po later – but just a dear of a lady, with a wicked understated sense of humor.)  And her friend, Cyril, was most charming and welcoming as well. I had met Michael briefly on an earlier trip of his to the States but didn’t really know him at all.  Yet, I felt as comfortable here as if I had known them all my life.

Later in the day, we headed to the Charles Bradlaugh Pub down the block to take advantage of the free wi-fi.  Fortunately, we were able to get both Chris’ PC and my iPod working so all fears of being incommunicado after the McCarran Airport (Las Vegas) experience were laid somewhat to rest (although Chris’ PC was pretty unforgiving over the course of the trip and well beyond!).  Over a couple of Tetleys, I posted an update to Facebook, checked e-mail and made plans to see friends of mine from many years ago (Jan & Cliff) in Vegas upon my return.

(Of course a friend I haven’t seen in over 15 years happens to come to Vegas while I am on a different continent!  We had only a day or two of overlap but were able to make enough of a plan being on different sides of the planet that we actually did catch up.  What did we do without e-mail????) 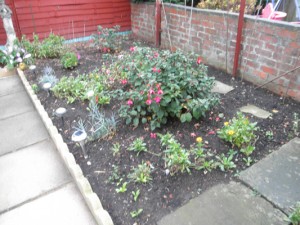 I did venture out to the smoking area a time or two while we were at The Bradlaugh.  Many people smoke in England (and France and Italy for that matter), but outdoor smoking can be more of an adventure in a cool and rainy climate than it typically is in Vegas.  This place actually has a lovely, large courtyard-type area outside that would be, I imagine, quite crowded in the right weather.  Picnic tables, music, a garage-type structure to stay out of the elements.  Fortunately, the weather was remarkably mild for most of our stay, so this was a pleasant enough environment in which to have a puff or two (although certainly not as pleasant as Mum’s little English garden).

Then, a stroll back down the block for an early bedtime, still catching up from the long journey and in preparation for the planned outing to Stratford-on-Avon (Shakepeare’s stomping grounds) the next day with Bronwen.

← My First Trip (& Arrival) Across the Pond
In Shakespeare’s Footsteps →