My First Trip (& Arrival) Across the Pond 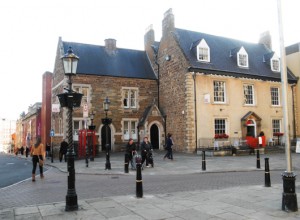 When we got to the ticket counter, the agent told me abruptly that I had to sign my passport in order to check my bag (which of course flustered me, knowing I had overlooked something and feeling stupid; not a good feeling to start the trip).  Then I temporarily could not find my smokes, even though I’d put them in my pocket for easy access.  That’s what happens when I get flustered…

We went outside (a beautiful balmy day) and I had a couple of smokes, knowing it would be a LONG time before another chance.

We went in and headed to security, where there was a little older guy working that called out “Over here, girls.”  I responded with “Oooh, he called us girls; I like him already.”  Then he got flirty and said “You girls would like me.  Anyone who looks like me at 75, you KNOW is healthy.”  He wished us well on our trip and, from there, I had my first experience with the “full body scanner.”  That was creepy enough, but was followed by a pat-down by an even creepier TSA agent that was not clearly male or female (although only females are supposed to pat down females).  Another not so good experience, Chris and I agreed – I am starting to really have doubts about making the trip at this point.  But I know I must – I’ve waited far too long to let little things (anything, really) bring me down.

While waiting for our flight, neither Chris’ PC nor my iPod would work for browsing on the McCarran wi-fi.  Great!  Will we be stuck without a way to communicate on our trip (a BIG concern for going solo through France & Italy for me)?  Really, I am taking this trip why?  Are these all signs of what’s to come?  Not sure whether to laugh or cry…

We had a quick cocktail and boarded the plan.  Chris was in the row behind me.  (There was a screw-up with the Virgin site after we picked seats online, and mine were lost.  I found out shortly before the trip, but Virgin never responded to my e-mail.  We didn’t bother to check at the airport because it was pretty busy and I figured I’d sleep and Chris planned to watch movies and read a book anyway.)

The rest of my row was filled with a friendly elderly British couple.  The female assumed I was Jewish (yeah, not the first time that’s happened — maybe it’s just not in this lifetime…) and was a bit flustered that I wasn’t.  But she quickly got over it and they told me all about their travels in Israel and the U.S. (including that the train travel is amazing here, that they went cross-country and thought it far surpassed rail travel in Europe).  Guess maybe I should try that some time (they were surprised I had not!).  This pleasant chit-chat at least relaxed me some and made me feel more like I was embarking on an adventure than a disaster.

About an hour, hour-and-a-half into the flight, they came on the PA and asked if there was a doctor or nurse on board.  Shortly after, the seat belt sign came on, even though there was no obvious reason on this very smooth flight.  Then you could tell they pulled back on the throttle and we started to descend a bit.  The elderly couple and I began to speculate that there might be a medical emergency for which they were considering an emergency landing.  (Turned out a bit later, we were right – they had been considering until they realized it was too late.  Yes, that’s right.  The rest of the 10-hour flight we were carrying a corpse.)  When I went to the restroom, a guy in line had come from further back where the attendants seemed to have gathered.  He confirmed they were going to land for medical attention, but it was too late.  Then, on my way back to my seat, I had to shift to allow the attendants by returning to the galley with an oxygen tank and the portable defibrillator (further confirmation from the looks on their faces).  And all the while, the in-flight movies stopped and we were left with nothing to do (no entertainment, no food or beverage, etc.) for a couple of hours.  The entertainment finally was fixed, but there was still minimal food/beverage service on the lengthy flight.  Guess having a DB onboard is enough to throw things a bit out of whack. (And speculation about where and how he rested for the next nine hours, on a full plane, provided a fair share of morbid humor for months beyond.)

At the end of the flight, the crew/pilot indicated we would need to stay in our seats until the police boarded and investigated the in-flight death.  Really!  After roughly 12 hours without a smoke and who knows how much longer to go after leaving the plane?  (Guess I should have just quit at that point.)  Not even a day in, and it’s been quite an experience.

But here’s where it really sunk in that I had finally made it across the pond.  Honestly, I felt like I was in some kind of Pink Panther or Monty Python movie, with the elaborate uniforms of the coppers at Gatwick.  Fortunately, they conducted their business promptly and we were off the plane fairly quickly.

Customs was a breeze compared to what I might have expected.  It only took a few minutes to get through, and the woman agent was very pleasant.  Just a few questions and off we went.  Shortly after clearing customs, we saw a bunch of police escorting a distraught woman of 50ish or so, most likely kin of the “dead weight” (more morbid humor, purely a coping mechanism, with no disrespect intended) we’d transported back to the UK.  It really was rather a tragic and somber start in a foreign land.

The train ticket windows were nearby; we bought tickets and had only moments to make the next Gatwick Express into London with our luggage in tow.  The train was very crowded (think sardines) and it was a very long 30+ minutes.  Once we got to Victoria station in London, we had to take the underground to get to the proper train station (Euston) for the train to Northampton.  The tube had reconstruction work going on, so we had to take lines different than Chris’ norm, and it required lugging everything up and down stairs in crowds, after a long and exhausting journey.  (In the midst of it all, the auto turnstile during one of the metro connections ate my ticket and we had to call over an attendant – was glad to have all these challenges in the company of my dear friend and England native Chris, though.  I would have been much more flustered had it first occurred during my solo travel.  I am not always the most level-headed when I’m out of my comfort zone.)

And I tell you, for a wee thing, that Chris shakes a leg.  I had trouble keeping up with my hefty three weeks worth of luggage.  At Euston, I believe, I finally begged a quick smoke and potty break.  It was the first chance I had to really kind of take things in, even though trains and tubes were novel enough for me at the time.  But then to walk outside and see red double-decker buses and Euro styles, with English accents all around, on a wonderful fall day was a sight for sore eyes!  After a smoke, Chris informed me the loo would cost me – something else new to get used to…  Pay to pee?  Really?  I didn’t include THAT in my budget… But so many things so foreign to me and so long awaited delivered an excitement I hadn’t experienced in many moons.

Once we got back in the station, we were on a train to Northampton within minutes.  The 90-minute or so journey was much calmer, and, when we arrived, a nice older man put our bags off the train for us and pointed us to the “lift” so we wouldn’t have to lug everything up the stairs and back down to go up and over the tracks.  What a nice welcome! 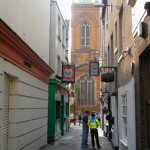 We grabbed a cab to Chris’ Mum’s at the train station and had to load our own bags (no tip for you!).  I was truly tickled by riding on the “wrong side of the road” for the first time.  I was in the back seat behind the driver (our passenger side) and got a kick out of pretending to wave at people as we passed by. 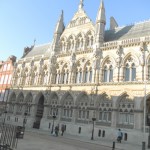 After we got settled in at Mum’s, the three of us went for a walk about town.  More of a city than I expected.  It definitely took some getting used to, to look the opposite way to cross the street safely – even Chris was out of practice.  Chris pointed out some of the more historical buildings near the town center, and I took a few pictures.  It was definitely nice to stretch the legs a bit after the long journey and to get acquainted with my “home base” for the next three weeks (although the layout left me confused till nearly the end).  It was an easy walk to Market Square (with a farmer’s market/swap meet held several times weekly), the mall, the casino, and especially, the Charles Bradlaugh Pub at the end of Mum’s street (with free wi-fi, and thus my second home while I was there).  The train station was a bit of a hike but certainly walkable with minor luggage and decent weather.

When we returned to Mum’s, Chris’ brother Michael was there (he lives a few doors down).  I gave Mom a quick call to let her know I had arrived safely, then we all chatted, watched TV, and ate sandwiches.  Somewhere during all this, I first realized my boot heel had separated from the sole and was basically out of service (yes, the now well-known warrior boots that were intended to be my primary footwear for the journey and that challenged me most every step of the way).  To be dealt with later, now that exhaustion had set in.  A quick shower and off to bed after the long eventful journey, so as to be ready for lunch at the casino with the family on Sunday.