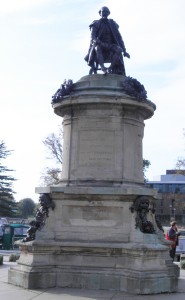 9:30 am Bronwen arrived to pick Chris, Michael and I up for our trip to Stratford-upon-Avon, arranged prior to leaving the U.S.  Bronwen is such a lovely, cheery, big-hearted Englishwomen and cute as a button besides.  After hello’s and hugs, we headed off.

Of course, being the American that I am, I immediately went to the wrong side of the car after being given the “ride in front” spot and had to spout a blushing “Oops” as Bronwen approached and gave me a funny look since I was in her way.  Oh so many fun differences!  However, given that I drive myself most everywhere, it seemed quite at home to be in the equivalent of the American driver’s seat, without having to keep my eyes on the road.  At least the perspective was normal… 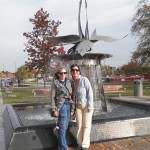 Chris & I at Fountain

The town of Stratford-upon-Avon was actually larger than I expected, and we went through quite a bit of residential and shopping area before arriving at the river, on the other side of which was a large parking area across from the Royal Shakespeare Theater.  We finally found a spot, and there were these interesting little machines in the parking lot where you paid to park.  I’m not even sure how they knew when you ran out of time; perhaps you got a card with a time stamp that could be checked at any time?  (Guess I should have written in more detail at the time, but so many things were so fascinating and there was so much to take in, I guess the parking lot gadgets just didn’t make the cut!)  I do know we were very concerned with getting back before time expired, so there was clearly a method of some sort. 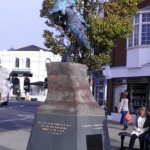 It was a very nice Autumn day, particularly by England standards.  Breezy and a bit brisk, but basically blue sky with lots of puffy clouds.  We made our way by foot up through the parking lot and across the river, then into the park area past statues of several Shakespeare characters with the centerpiece being “The Bard” himself.  On past a fountain of more modern design in front of the theater and then, just beyond, into the original, quaint part of town where Shakespeare roamed.

We strolled through town, just taking it all in, me shooting photos of just about everything possible (quite an accomplishment given I’ve never been much for photo-taking and had bought my first digital camera just for the trip).  A quick stop at Valerie’s Patisserie (yes, a French pastry shop in ye olde England) to use the wi-fi and grab something yummy – A cappuccino and chocolate croissant for me, please!

A quick stop at a gift shop for souvenirs for me and the family – a Union Jack coin purse for me and some card decks for Mom and brother Kev.  From there, on to Shakespeare’s birthplace, his daughter’s house and finally the church where he is buried.  Just an amazing feeling to be in places so steeped in history – at the church, for example, the Magna Carta copy just inside the front door, the incredible stained glass, the pipe organ, the readings.  The burial commemoration was in an inner sanctum we did not access, given there was a rather steep fee that seemed worthy of any American tourist trap. 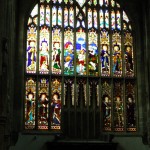 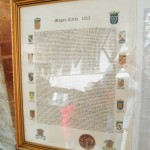 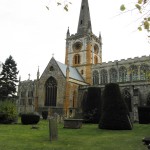 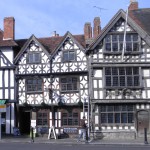 We had lunch at The Garrick Inn — The Oldest (or is that Olde-ist) Pub in Stratford-upon-Avon.  A very typical old English-style pub with dark woods and colors and many notable photos and drawings, with a large and noisy lunch crowd.  I had a black and tan (combo beer of Guinness and pale ale), which they knew in this place of Olde World ways at least (more on that later), with cauliflower au gratin and sweet chile prawns for lunch.  I at this point already understand why Chris made me, upon scheduling our trip, commit to tell everyone how good English food really is, since you far too often hear otherwise from silly Americans who know no better and base their opinions on those circulated during the World Wars.  So, I am telling you now (and I will tell you, and anyone who will listen, again…), I LOVED the food in England.  Great variety, great taste, and often a freshness you just don’t get in the desert in which I dwell (much the same can be said about the Brits themselves – who, in my experience, are far less stuffy than we “Yanks” always imagine them). 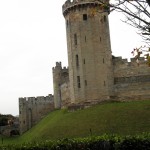 A hurried walk back to the car before time expired completed our four-hour visit to Stratford-upon-Avon.  Thinking we were returning directly to Northampton and most grateful for Bronwen’s generosity in helping me satisfy one of my historical interests, I was most confused when there seemed to be some sort of code talk going on about what direction to go.  I thought surely they must know how to get back since they had known the way there… The trick was in the surprise.  Unbeknownst to me, Bronwen had been debating a couple of other sights and decided on Warwick Castle, “a medieval castle developed from an original built by William the Conqueror in 1068. The original wooden castle was rebuilt in stone in the 12th century” (per Wikipedia). 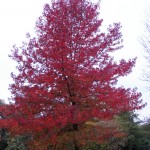 After leaving the freeway and heading along country roads, we arrived in a typical English village with narrow winding roads and old stone buildings.  Right in the midst of the town, there were gates into the castle grounds in a few places.  Upon entering, you find yourself on a road through a wooded area that makes you forget you are in the center of a town.  Given it was late October, the trees were turning colors.  In the lot where we parked, there was a tree with leaves the most vibrant shade of red I think I’ve ever seen, even though there are many areas in the States quite rich in any number of shades.   The beauty of the setting itself was enough to inspire pure and natural joy. 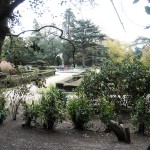 The actual grounds of the castle (i.e., the rolling grassy hills surrounding the structure and the perfectly manicured garden with various topiary peacocks) were surrounded by wrought-iron fencing.  Along the perimeter, there is a lovely wooded trail, and you can walk from the footpath through the trees and brush to the fence and catch glimpses of the stunning gardens and the castle as it would look in a movie’s opening (if you look beyond the strollers and such on the pathways, that is).

I was quick to learn that the U.S. is not the only nation to capitalize on the tourist trap phenomenon and a bit taken aback by the amusement park atmosphere associated with the stuff of legends.  Entry fees to the inner sanctum at Shakespeare’s church were peanuts compared to entry here, and closing time was not far off.  And, given that it was school break, the place was overrun with families with children running amok (the likes of which create an allergic reaction for most, if not all, of us in this group).  While I would have liked to explore a real live castle (amid long-lost princess fantasies), the conditions were clearly suboptimal for all that.  But I digress into lesser thoughts that took mere moments at the time.

After a nice stroll and look-about, we took the long way back to Northampton, on winding semi-rural roads, passing through the small towns of Leamington and Southam.  I always enjoyed traveling through small, older towns in the States, but there is obviously nothing comparable to seeing, for the first time, towns, and many of the buildings in them, that have stood for thousands of years.

Back in Northampton, a very pleasant day comes to an end with parting hugs, thank you’s, and well wishes.  Later in the evening, another trip down to the Charles Bradlaugh, for a quick check of e-mail and my first experience with a true English-pub quiz (live trivia competition) with Chris and Michael.  While I was downstairs checking my e-mail before the quiz, the game host approached to solicit my participation and share a bit of small talk (once my accent was discovered – a common occurrence in Northampton, as it is apparently as popular a novelty to be American there, for most folk at least, as it is for us to encounter a Brit here in the States).  I assured him I would join in with due haste since my friends were upstairs and ready to go.  Quite a different experience to play in teams and write answers on paper for later verifying by hand!  Overall, a fitting end to an event-filled day, given that I first met Chris and Graham playing screen-based trivia in a Las Vegas “pub” several years ago.

A bit of a drizzle settling in over the town for the walk home.  Big day tomorrow – heading off for Paris early in the a.m!