Trekking from The Pantheon to The Spanish Steps 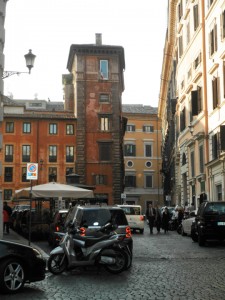 Through narrow pedestrian-filled streets lined with all sorts of cafes and shops, with only a general sense of direction to guide me, I wonder if I will in fact be able to find the Pantheon at all.  Many of these tiny little streets only last for a block or two and, if you can find the names at all, they seem to change every block and they don’t run anything near square. 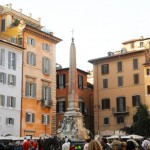 Eventually I find myself in a plaza (Piazza della Rotonda) that looks exactly like what you would expect from a movie scene.  Colorful buildings surrounding the ‘square’, with little balconies, open shutters, and then the shops at street level and the obligatory fountain and obelisk (Fontana del Pantheon and Obelisco Macutèo) near the center.  I’m a bit disappointed that there is no good way to capture it in a photo – it’s kind of cramped quarters and the pedestrian traffic is steady.  As I rotate to survey the plaza in its entirety, I realize I am now standing right in front of the Pantheon! 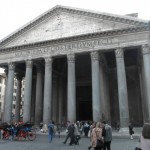 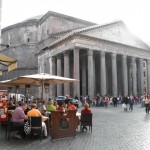 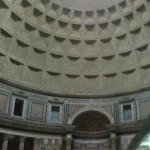 I am not quite sure what to expect when I enter the Pantheon, but I guess I should have done my homework.  Far from the transport back to the times of the Roman pantheon of gods and goddesses I imagined (perhaps I have focused too much of my reading on Greece!), I find it filled to the gills with Christian symbolism and more honors for Vittorio Emanuele II.  It still is a bit awe-inspiring in its solemnity, even to someone expecting something more joyous.  There are various displays (for lack of a better word) set up all along the circumference of the room, and I dutifully inspect each one, even taking photos of most.  It just seems the ‘right’ thing to do, yet the lighting is so dim, the photos do these elaborate works of art little justice.  See for yourself: 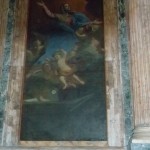 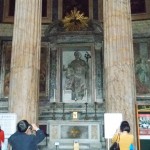 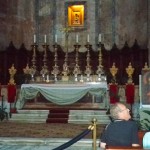 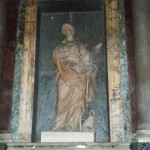 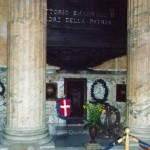 I was also surprised at the size of the Pantheon; I had imagined something much more extensive.  So, this stop does not take nearly as long as I anticipated, and I am quickly back out in the glorious weather, now in search of Trevi Fountain, but drinking in all the sights and sounds along the way. 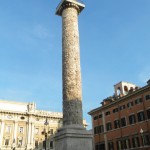 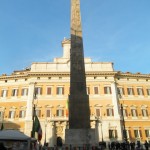 As I walk in what I believe is the general direction of Trevi, zig-zagging along with the streets, I pass through various piazzas, each with its own obelisk or column, as well as a fountain typically.  First, I reach the Piazza di Montecitorio, which is flanked by the Palazzo Montecitorio.  There is a fair amount of barricade set up and an obvious (though not imposing) police presence, given that this statuesque structure houses the Chamber of Deputies, part of the Italian Parliament.  In front of the Palazzo sits the Obelisco (Obelisk) of Montecitorio.  As I am leaving this piazza, I pass the Column of Antoninus Pius, which appears to be undergoing some restoration (from looking online, this seems to be a never-ending project – apparently the column has some significance, relative to all the other potential projects here). 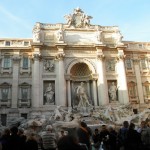 I wander this way and that and finally see a little brown sign that says, in white letters, “Trevi Fountain” with an arrow that does not indicate an obvious route.  I wander in the area a bit and am starting to get frustrated, when I see a little hand-written sign on a street corner that has a much better arrow.  Perhaps some shopkeeper had given out enough directions for the day?  Or was it a compassionate tourist who, once learning the way, decided to share?  In any case, it gave me the boost I needed – I had been ‘warm’ but not ‘getting warmer’ on this treasure hunt. 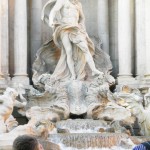 The fountain was within a block or so, but is pretty deep inside a maze of short streets and is not even really in a piazza like other lesser fountains.  The city has definitely encroached on its territory.  The area is absolutely swarming with people.  (Wonder how they all found it…)  There is some seating, but it is mostly just a cobbled open area (or not so open – I could not get near enough the fountain to toss in a coin if my life depended on it!).  I take a few photos, doing the best I can with the immense crowd and the cramped geography, and decide to move on.  I’m getting hungry, thirsty, and exhausted and I still want to make it to the Spanish Steps.  Maybe I can find a place to rest the tootsies soon – they would like that.  I had hoped I might lounge here at the fountain, but clearly that is not meant to be.

I continue on in search of the Fontana del Tritone (also di Trevi – odd) or Triton Fountain in the Piazza Barberini, on my way to the Spanish Steps.  As I near the Piazza, I see a sign for the Barberini Metro station and am tempted; I am getting really worn out.  But I know I won’t make it back to this part of town before I leave, so I push forward.  A little further along, I finally spot the fountain…barely, it is much less imposing than I had expected from photos, and it certainly doesn’t do Triton’s power justice.  I don’t even bother with a photo, figuring stopping is not a great idea right now. 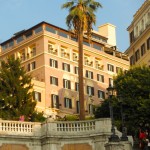 Via Sistina Hotel where I found Spanish Steps, Rome

Good thing I didn’t know at the time it was going to be all uphill to the Steps, at least by the route I followed.  I feel like I’m moving at a snail’s pace trying to drag my tired tootsies up the steep incline through a charming little neighborhood closely lined with sidewalk cafes and shops.  Finally, I reach the top of the hill and realize I have come in at the TOP of the Spanish Steps (which are known as a steep climb!).  Well, that’s a relief!  Even if you go to Google Maps for walking directions, it gives you a different, little bit longer, route than I took as the preferred route; I’m sure this is because taking Via Sistina is like climbing a mountain.  Oh well, it’s all downhill from here.  HAH!

I rest long enough to catch my breath, taking in the beauty of the hotel on my right and the Trinità dei Monti (the church at the top of the Spanish Steps) directly in front of me.  I wander through the plaza in front of the church and gaze down upon the stairs and the piazza below.  It is not particularly busy, compared to some photos I’ve seen, but there are several groups of young people socializing under the partly-sunny skies.  Then, I investigate the obelisk in front of the church, at the top of the Steps.  (What is it about me and obelisks?) 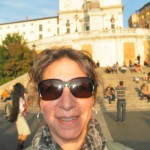 Once I am recuperated a bit, I start heading down the Steps, taking my time, pausing every once in a while at the landings between flights to take in the different perspectives.  At one, I again try the self-portrait feature on my camera and snap a couple of photos from one of the landings, trying to get a few different angles on what’s behind me.  Then, I continue my descent and land in Piazza di Spagna.  Disappointingly, in this charming, history-filled enclave, the first thing I see at street level is a jam-packed McDonald’s.  Et tu, Brute… 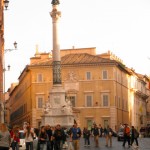 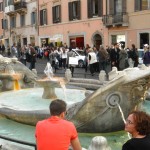 In front of me, near the center of the piazza, is the Fontana della Barcaccia, a boat-shaped fountain.  I want a photo, which is quite an endeavor; the crowd is growing with every passing minute, and the fountain has a low ledge perfect for seating.  I finally find a spot with fewer bodies and get a decent photo.  I then spot another column a short distance ahead and go to investigate, finding the Colonna dell’Immacolata (Column of the Immaculate Conception).  Who knew?  Must be a sign to get out of here and head back to my neck of the woods. 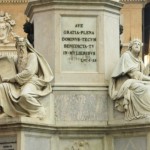 Colonna dell’Immacolata (Column of the Immaculate Conception) Base, Rome 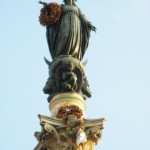 So off I head to find the Spagna Metro station, which is even closer than I had hoped.  I step into the train car, already dreading the walk back to the hotel.  It is a definite challenge, but at least the end is in sight.  I drag my exhausted self up the hill and across the streets.  As I am about to enter the neighborhood, a professionally dressed woman directly approaches me and starts speaking rapidly to me in Italian.  I am pretty sure she is asking me for directions, and I am wondering what it is about me.  This is the second time this has happened in my short time in Rome.  I look at her regretfully as I utter “No parlo italiano,” (same as I had with the woman the previous day).  She looks at me like “you’ve got to be kidding” and strides off in a bit of a huff.  I continue on my merry way, anxious for a rest, and finally the hotel appears.

← Inside the Colosseum & Beyond
A Rome Night of Global English →