Inside the Colosseum & Beyond 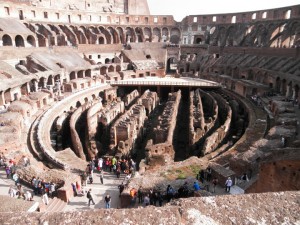 Well, apparently yesterday’s travels and tribulations (including the 3.5-mile walk), combined with the rosso and Guinness, took their toll. I am horrified to awake and see it is already 10:30. Darn it all! Now, I’ve missed the included breakfast, and I was so looking forward to seeing what they had in this charming little place. Aah well, there’s always tomorrow… Today, I’ll have to settle for a granola bar from home to get my day started. I decide to wear my Michigan State clog slipper shoes today, to give the warrior boots a break and my feet a change of pace. 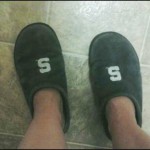 I am initially pretty upset with myself about the late start, but, as time passes, I realize just how hard I’ve been pushing myself over the last few days, between all the train travel, challenges and exploring new lands. I decide my body is letting me know what it needs, and there is no harm in giving myself some recovery time to better prepare me for the rest of the adventure. I had not started out with as much spontaneous time in my travels as I had wanted, so maybe the forces of nature are just testing my resolve. 🙂 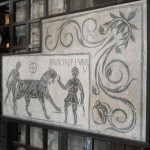 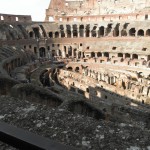 I finally head out the door about noon and am feeling a little rough. I really wore myself out yesterday. But I have my priorities – I can’t wait another minute to tour the Colosseum! Then I arrive and find a line a mile long. I had no idea you could make reservations, but that wouldn’t be very spontaneous now, would it? I get in line, wondering how many hours this will take and then, miraculously, they come along the line and ask if anyone is looking for a guided tour in English. This wasn’t exactly what I had planned and it cost 5 euro extra, but then came the kicker. You could jump out of line, get your ticket and go to the waiting area where the tour would begin shortly. Let’s see…one euro to use the potty at the Metro station, one euro for help to get my Metro pass, five euro to save myself hours in line??? Yup, count me in. My time here is too valuable to spend it standing in line. 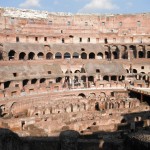 So I go up to the window and pay my 17 euro (12 to get in and 5 for the guided tour) or about $23 and go to the staging area. It is not particularly well-organized, and the wait seems to drag on forever. I can hear people starting to complain, so it isn’t just me that is anxious to get going. The natives (or non-natives, as the case happens to be) are getting restless after paying for this tour. 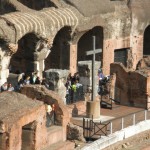 We are finally directed to a hallway to meet our guide, a lovely young Italiana holding a book of diagrams and drawings. We meander through the sprawling facility, up stairs, down stairs, pausing here and there for a description of the history, accompanied by picture presentations from her notebook. Her English is decent, although she uses some unusual words which are not exactly representative of what she’s actually trying to say, and her accent is thick. I am enjoying every minute of listening to her, now even more pleased I paid for the tour, but many of the other guests are not so entranced. 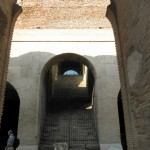 I overhear several members of the group complaining how this is not an English tour, how they can’t understand a thing she’s saying, and, pretty soon, people start dropping off. I guess they are too impatient to bother concentrating on what she is saying. (Or maybe I’m just at an advantage, understanding the basis of the Romance languages and how they relate to “our” English.) In any case, did they really expect someone who speaks American English to be guiding a tour of an ancient Roman structure? Now that just wouldn’t be right! 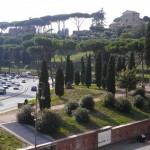 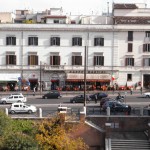 By the time the tour ends, I am in even greater awe of the Colosseum. Thinking about the time period in which it was built and active, and seeing the size and scope of it firsthand, it’s almost beyond comprehension. But all the standing around and navigating the many levels is taking a toll on my energy already – really wish I’d made it up in time for breakfast. 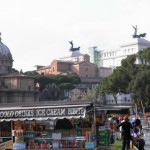 I head out from the tour and up into the Roman Forum area, with the Pantheon slated as my next destination. Again, I am just amazed at the ancient ruins poking through modern structures at every turn. I reach a large plaza/traffic circle, with traffic whooshing everywhere, that has an elaborate building of spectacular proportions looming over it – the Monumento Nazionale (National Monument) a Vittorio Emanuele II (the first king of a unified Italy, per Wikipedia). I snap a few photos, in between navigating the traffic circle on foot, and continue on my pilgrimage to the Pantheon. 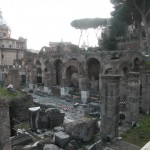 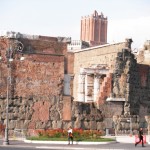 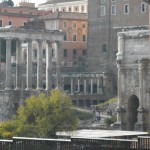 Here are photos of the Monumento Nazionale a Vittorio Emanuele II: 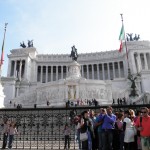 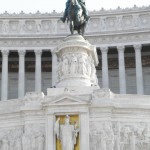 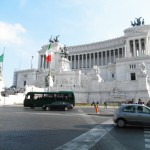