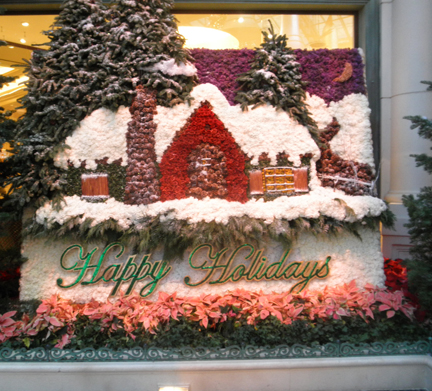 After the roughest year of my life, I decided to do everything I could to embrace the festive spirit this year and talked a friend into joining me. We visited the Las Vegas Strip the Friday before Christmas, my first holiday excursion in 19 years as a resident, and were sorely disappointed. The Bellagio Conservatory was spectacular and a great way to start our excursion. Beyond that, it went quickly downhill. We walked from Bellagio to The Venetian (based on all the promotion of “Winter in Venice”), and the only seasonal décor along the way was some garland and ornaments outside Caesars lobby. The Venetian itself was a tremendous let-down. Amidst all the usual adornments of the Strip, the seasonal items were barely noticeable. The ice rink didn’t look at all festive, given that it was dominated by a mirror ball that would have put the original Studio 54 to shame…not my idea of “holiday décor.” I couldn’t help but compare the absence with the significant displays put on for the Chinese New Year (for example) and wonder how to make sense of it.

With the city still reeling from the effects of the “economic downturn,” it would be nice to have a central place where locals could enjoy a stroll through a “winter wonderland.” It might just help build a greater sense of community pride and appreciation, even if it didn’t contribute to tourism (more on that later). Given that the community provides much to the casino companies, could they not offer something in return to our residents? It really gave me the sense that the Strip does not feel “part of” the community, given that most towns small or large throughout the country are much more festive and, as such, welcoming at this time of year.

Ah yes, welcoming — a key for tourism during the holidays, as New York and many other cities around the world already know. There are plenty of people, young and old, who do not have (or at least do not join) family this time of year, who use the time to relax before New Year’s or who just enjoy getting into the holiday spirit. And then there are the adult families who vacation together during the holidays. It would seem there is plenty of opportunity to capitalize if the effort is made, just like any other long weekend or cultural holiday. As for we locals, maybe there’s hope for a “community holiday central” in the future of the Downtown Project?