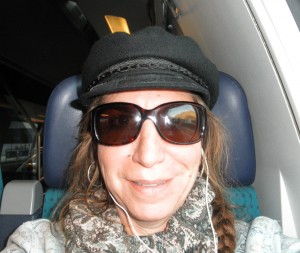 I make the train without incident and settle in for the first-class journey to Milan.  Oh, Angry Ticket Guy, I sure hope you’re heading into Rome and not on this train…  Whew, a different ticket taker and me better prepared – Eurail pass filled in? Check.  Eurail pass in hand?  Check.  Seat reservation in hand? Check.  The ticket taker reviews them all and returns them to me without incident.

I have a window seat and take in the surroundings as the train heads down the rails.  Not far from Rome’s Termini station, there is a Philips storefront. (Bruce works for Philips so I wonder for a moment how his new life adventure is going, since I haven’t heard.)

Wait…what’s this interruption?  The ticket taker is back and again asking for my documents.  I start to sweat, and my mind begins working over time.  I’ve never been asked for my ticket twice on the same route before.  Is there some sort of problem?  What is it about this route?  He again reviews them, and I notice a brief flash of confusion cross his face when he realizes the ticket is already punched.  I, just as briefly, feel a flash of compassion, having had my own senior moments.  They say short-term memory is the first to go, and it has only been 45 minutes since he first reviewed my pass and ticket.  In the end, he returns them to me without comment or incident, and I settle back into my seat and wait for my heart to stop racing.

Somewhere between Bologna (where Richard and JoAnna’s son is going to school) and Milan, there is a Ferrari parts plant (which, of course, I would notice being from Michigan – the U.S. automotive heartland – and a car enthusiast myself).  Really?  The ticket taker is coming down the aisle again?  Aaah, this time he remembers and does not ask me to retrieve my ticket again.  Hallelujah!  My conclusion at this point, though, about the key to travel in foreign lands is: Expect and be prepared for anything, especially if you’re traveling by train on a Eurail pass…

I did not have a chance to use the one-euro restroom at the station, given my rushed schedule, so there is no way I am going to make this 3½-hour trip without using the train’s facilities.  (Somehow, my mechanical sensibilities never apply in transportation restrooms – I have the worst time trying to figure out how to work the toilet and/or the sink in every plane or train – so I do my best to avoid the frustration.)  Finally, I can wait no longer.

I enter the tiny compartment, only to be greeted by a HUGE turd in the bowl, patiently awaiting the next unsuspecting visitor.  REALLY???  How hard is it to just push a button and get rid of that shit?  (Pun intended :-))  I mean, this restroom actually has a graphic on the toilet to demonstrate the flushing process, so there is absolutely no excuse.  So I take care of the stranded turd, then take care of my own business and head back to my seat to watch more of the countryside and recover from my ‘faceless encounter’.

The flat part of Italy approaching Milan from Rome could just as easily be many a stretch of land in Michigan, like between Midland and Bay City, for example.  Farm land and trees for wind breaks, alternating for miles.  Even the bridges and other structures seem familiar.  Y’know, it wasn’t a bad idea to come back this way.  I’m just realizing how much I missed on the trip to Rome, even with a window seat, thanks to the Angry Ticket Guy ordeal.  Much better this time around, says the seasoned traveler emerging from my previously sheltered cocoon.

I arrive in Milan and board the train to Turin, smooth sailing.  The ticket taker is shooing some hustler off the train and looks over at me, rolls his eyes and makes a side comment to me, then gives me a funny look when I don’t respond.  I’m guessing this is another case of ‘mistaken Italian identity’.  Certainly hope he realizes when he checks my pass that I wasn’t being rude, I’m just American – HAH!

Now if I only had a plan for when I arrive in Turin.  First, there are two stations in Turin – who’d have thunk?  (Guess I didn’t realize how big the town was – Wikipedia says 2.2 million in the metropolitan area.)  I decide I will debark at the first station.  That seems to be where the bulk of the hotels are, so I am thinking that must be the main station, right?  (A bit of foreshadowing here…)

The train pulls into the first station, and I exit into the middle of a rain-filled cloud (or so it seems).  It is raining steadily, and the cloudy mist swirls around like a scene from Avalon.  Night has fallen, and I am desperately in need of a restroom.  There does not appear to be much of a station here, as I traverse the maze of stairs and narrow passageways, all under cover of my hoodie, as the steady stream of raindrops continues.

I finally see a restroom sign and feel a sense of relief wash over me.  There is nothing like the pitter patter of rain on cement to increase the urgency.  I enter the restroom, surprised there is no toilet tax…until I realize there are two stalls with no doors and only holes in the ground – not a hint of ceramic to be seen.  There is no way I can handle this set-up with my luggage in tow and my many layers of drenched clothing affixed to my body.  Time to suck it up (or should I say squeeze) and keep moving.  A bit of a risk, given I don’t even have the refuge of a hotel room lined up yet.

At long last, I emerge from the labyrinth and find myself on a rather dark street, with an assortment of hotels and what appears to be a shopping district across the way.  I notice that the first hotel in view is Hotel Dock, which I had targeted through Booking.com, due to its ratings, availability, affordable prices and proximity.  I quickly make my way across the mostly deserted street, in hopes of quickly landing a home for the night (or perhaps more concerned about the toilet contained therein).

I slosh into the Hotel Dock lobby and am hesitantly greeted by the young lady behind the counter.  Although her English isn’t great, it is good enough to let me know someone had just taken the last room a minute ago.  OK, now I am starting to stress, thanks in large part to my bladder and my personification of a drowned rat.  (Lest you wonder why I don’t visit the hotel’s public restroom, there isn’t one.  In many of the hotels I have visited on this trip, the lobby is little more than an entryway, a small chamber with maybe a couple of simple chairs and a small window to access the clerk.)

She suggests a hotel two doors down that is a four-star hotel with cheap rates (it’s really amazing how well two people can communicate even in broken Ameritaliano).  I asked if perhaps I could use their lobby wi-fi to search Booking.com for options, and she graciously agreed, giving me the log-in information.  I am really grateful at this point that she is doing everything she can to help.  She seems genuinely concerned, you can see the empathy in her face as she smiles her encouragement.  A nice change from most of the women I’ve encountered in the service professions here.  Most are Sour Sallies, like the Rome ticket again I managed to avoid.  Then again, this gal is much younger than the stern matrons I have encountered thus far, and I am not by any means convinced she is an actual Italian, given her fair complexion, blond hair and light eyes, either of which could explain the difference.

As I scour the rooms available on Booking.com, I quickly see the exact place she had mentioned, Hotel Diplomatic.  They still show availability, and the rate is actually a couple of euro less than Hotel Dock, so I reserve it immediately.  This way, my appearance will not impede the clerk’s willingness to assist (or overcharge) me in my last-minute arrival on a dreary night.  I thank my young friend profusely and head two doors down.  At least there is an overhang to protect me from further abuse by the elements.

← Arrivederci, Roma – On to Torino
Whining & Dining in Turin →