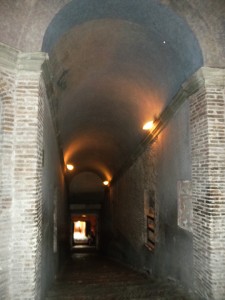 OK, this is Castel Sant’Angelo, NOT the subway.  It’s far too clean and bright to be the Rome Metro!

I climb from the Metro platform in the bowels of the building and emerge into the train station.  After locating the counter, I get in line to find out what my options are.  When I reach the counter, the ticket agent tells me she needs my Eurail pass in order to give me any information.  Oh for Pete’s sake!  Italy is a pain in the patootie for train travel.  So glad I got most of my tickets in advance – spontaneous travel isn’t all it’s cracked up to be from my experience.

It’s not that I don’t have my Eurail pass with me; I don’t dare leave it in my room.  It’s where I carry it that’s the issue.  I had purchased two “travel wallets” for my trip.  One could be folded into a large square and was designed to be worn around the neck.  The other was a belt-like design to be worn around the waist.  My Eurail pass is stashed in the wallet belt, which I am wearing inside the waist of my leggings, under a tunic-style dress.  This means that, in order to provide my pass to the agent, I need to perform some very strange public manipulations, right in front of her at the counter, to extricate the pass from the wallet, thereby also exposing the fact that I am wearing such a wallet.  (I must admit, however, I don’t suspect anyone but the ticket agent will even notice, given the people around me are involved in their own transactions, and I doubt my fellow travelers pose any significant threat anyway).

My first thought, in my state of frustration, is to just take a pass and wait until the next day to try to get a train heading to Genoa.  But the thought of going through the line again the next day is the last straw, especially given I’ve already gone out of my way, in my state of complete fatigue, to get it handled now.  So I do the gymnastics required to free the pass from my waist wallet without completely disrobing (VERY charming!) and quickly discover it is VERY damp from my latest trek in the dreary, damp conditions presently settled on the Eternal City.  After a brief wave of embarrassment, I quickly recover with an internal chuckle.  Serves her right for making this such a hassle, I can’t help but thinking – not going to let these railway employees get the better of me anymore.

Why is everything travel-related so difficult in Italy?  I had expected it to be more lax here, given that credit card policies seem to reflect there is more risk of fraud and such.  I had interpreted that to mean the authorities were not as careful as other countries, but, in retrospect, maybe they are making every effort to combat the same thing on a local level or it might be far worse.

Anyway, the ticket agent informs me that, given the type of pass I have, I need only make a reservation on the train from Rome to Genoa and not for the rest of the journey to southern France.  That works out well, since the station I am going through has a longer layover and I’ve pretty much decided I’ll just spend the night in Genoa and continue on the next day.  That will still put me in France a day early for my reservation at Nicole’s in Roquebrune-cap-Martin.  Just to be safe, I then verify that I can board the train in Genoa with only my Eurail pass.  (I will, of course, check again in Genoa to ensure I’m not threatened any further with fines from angry ticket guys. 😉 )

Now that I’ve succeeded on my main mission of the moment and have what I need to move on from Rome <sad sigh – missing it already>, it’s time to head back for a rest…  But wait!  I suddenly realize there is no acceptable and discreet way for me to replace the belt wallet around my waist (unless I want to pay the euro to go into the toilet).  I decide to risk it (although the Metro is one of the main places I’d rather have my valuables snugly tucked away) and then just go directly to the hotel from the station, minimizing any risk.  That way, I can rest in my room and place the wallet back around my waist before I head out for some dinner.  OK, now that that’s settled, I can chill on the trip across town.  Or not… My brain just won’t quit trying to make a plan.

I’m still not sure what I’ll do for a hotel.  I had looked earlier for options in Nice (a little beyond Nicole’s, where I am slated to pick up my car rental), but everything near the station was booked for the sixth (an unknown gift, I later discover, since the area adjacent to the station is more than a bit dodgy).  I just go forward with the plan I have so far, confident that everything will work out just as it is supposed to (and just fine in the end).

Maybe I can call Hertz and Nicole and move up both reservations by a day – just a thought.  I have already discussed flexibility with Nicole and know she has no other guests scheduled right before or after me, comfortable she would have let me know if there had been any change.  If I get back to the hotel early tonight, I might have to give that a go.  If not, I’ll hopefully have wi-fi in Genoa and can get it handled then.

It also strikes me that my Metro pass expires today, and I have no desire to figure out how to purchase a ticket for the relatively short trip from the Colosseum to Termini.  I’m thinking tomorrow I’ll just fork out for a cab; I have no faith at the moment in my ability to make the walk in the hilly terrain with luggage in tow, spent as I am.  Let’s just say I’m a little tired of walking… 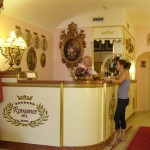 Aah, enough of that for the moment…I’ve arrived at Colosseum station.  So now I just have to make it to the hotel and all will be well with the world  :-).  When I enter the lobby, Antony at the desk inquires as to whether I will be staying another night and sternly informs me that there is only one room left and I need to let him know right away if I plan to extend my stay another night.  (Lucky for us both, he speaks excellent English.)  I smilingly assure him that, as much as I would like to stay, I will in fact be leaving tomorrow.

I get back to my room and strip to my bra and panties – can you say sweaty mess??  (I know, TMI!)  Seems I overdressed a little (I’ll blame it on the dreary weather) and find myself a bit overheated (hmmm, that must be why the Eurail pass was so damp).  Time to prepare for tomorrow’s journey.  I look through some options for hotels and trains, reorganize my suitcase (which is a bit jumbled after three days in one place and the move between rooms).  After a couple of hours kicking it in the room, I realize I can’t stop thinking about the tenderloin in white wine cream sauce with roast potatoes on the menu at Anti-Luzzi Café (the place I ate the first night) so I get myself together (waist wallet properly secured) and head out about five pm. 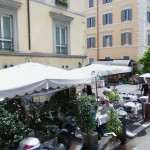 Once more at a sidewalk table at the café, I order as planned and opt for white wine (unusual for me) in an effort to better match the tenderloin sauce, of course.  When my plate arrives, there is nothing on it but tenderloin and funghi (the Italian word for mushrooms which I generally refer to as ‘fungi’ anyway – eeewww), and I am quite certain I’ll starve (even after my ginormous breakfast), given the day’s exertion.  All of a sudden, an angel appears – oh wait, that’s just my server rushing over with le patate the kitchen forgot. Yippee!  Got my taters!  And overall, it’s not a bad meal I’m treating myself to.

← Castel Sant’Angelo, Archangel Michael & St. Peter’s
What To Do, Where To Go After Rome →