A Delightful Italian Breakfast with the Folks from Modesto 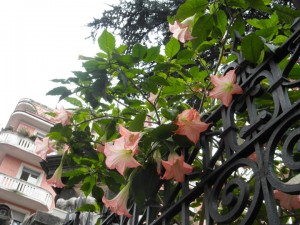 View from the sidewalk just down from Hotel Romance, Rome

Wow!  Even though I went to bed at nine last night, I still am having a hard time getting up when the alarm goes off between six and 6:30.  When I finally drag my butt out of bed, I get ready for the day and pack up what I can for the move to Room 12.  I go outside for a smoke and take in the charm of the neighborhood and flora, before heading in to the breakfast area.  I am looking forward to trying it out, since I missed it yesterday.

I get to the breakfast area and find myself struggling to decide; everything looks yummy.  There is no doubt I am going to eat enough this a.m. to keep me going all day.  I take some coffee (of course), a hard roll, with some cheese, ham and salami to accompany, and then a croissant-like (very) sweet roll dusted with powdered sugar, adding a little strawberry jam for accent flavor.  Oh my!  This is good stuff!  I am now really regretting sleeping in yesterday, whether I needed it or not.

Shortly after I start in on my ‘tastebud delight’, the American couple who came in the door behind me last night sits down at the next table over.  They didn’t realize I was also American because I hadn’t spoken to them the night before in my exhaustion.  Eventually, I can no longer contain myself and ask where they were from (and enjoy the rather pleasantly surprised look on their faces at finding themselves seated next to a fellow American).  Rick and JoAnna are from Modesto, in the tomato business and had just finished packing season.  They only arrived last night and are here to visit their son, who is going to school in Bologna; he will be meeting them later today.  I can see the concern in JoAnna’s face and how anxious she is to see for herself that he’s alright.  Can’t say I blame her, given the whole Amanda Knox ordeal (and only recent release) has got to be fresh in her mind.

When I tell them I am from Las Vegas, they recommend Metro Pizza as the best and ask if I know it.  I lean in a little, in mock confidence, and whisper, “I shouldn’t really admit this here, but I’m not much of a pizza eater,” and the conversation moves on to other things.  We chat for quite a while – they are going to cover basically the same ground today that I did yesterday (Forum, Pantheon, Trevi, Spanish Steps) and then visit the Vatican tomorrow.

Creating Tales to Tell – The Oft-Offending (Yet Oh So Comfortable!) “Warrior Boots”

Strangely enough, JoAnna inquires as to whether my boots are good walking shoes (as if she thinks they can’t possibly be).  I’m serious – this trip is all about the boots!  So I tell her “yes, but…” and give her the rundown on the warrior boots, explaining with all the things new to me that I might have expected to be a challenge – for example, travel by train or by metro — the biggest adventure has been the boots falling apart at the most inopportune of times.  Almost like she is reading my mind, she says, “So instead of worrying about gypsies…”  EXACTLY!

Then JoAnna asks me how I found out about Hotel Romance.  For me, Booking.com; for them, TripAdvisor.com.  She explains how they were a little put off by the name – to them, it sounded like, and I quote, “A porn hotel.”  When I get past my surprise, I tell her I too had doubts but for an entirely different reason – I thought, “Hotel Romance for a single woman traveling on her own? How’s that make sense?”  Funny how our backgrounds and perspectives in life influence our perceptions.  It’s amazing any of us can ever really communicate at all, when two people within the same basic culture have such different reactions to a name.  It certainly explains all those international marketing faux-pas covered in my education; it’s easy enough to get a totally different meaning than intended all in the same language within the same culture. 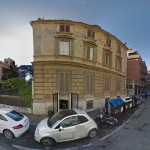 Hotel Romance Exterior from GoogleMaps (see the teeny, tiny sign to the left of the door?)

The funniest thing about it is neither of our initial reactions took into consideration WHERE the hotel was – I mean, really, the people who named it probably just thought that was a cutesy way of representing “Rome” (Italian, and French for that matter, are, after all, “Romance languages,” meaning derived from Latin or the language of ancient Rome).  Plus, I’m sure they felt it fit with Rome’s reputation as a “romantic city” and might help draw couples, which I would think is usually a pretty good target market for a hotel.  But please excuse the tangent…

In any case, we all agree that we are glad we couldn’t resist the photos and price and didn’t let the name scare us off.  I admit I’ve even decided to stay an extra night I like it so much, even though the location is a little out of the way.  JoAnna points out that she likes that the police station is practically next door, and I have to agree.  Now, they are through with their breakfast and bid me farewell.  I resume writing, after going back for round two of the sweet roll – I have never tasted anything quite so delightful and just can’t resist.  After all, I’m on vacation, right? 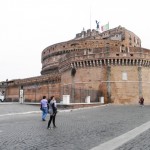 I finally finish up and head for the door, grabbing a packet of cookies on the way out, just in case my breakfast wears off during my meanderings.  Back to my room to make the shift to Room 14…Once I complete the move, I decide to check on some train and hotel options for the following night and then mosey out in search of Castel sant’Angelo, originally Hadrian’s tomb and later used by popes as a fortress and prison (with a secret corridor to the Vatican).  As such, it was more recently a central location in Dan Brown’s Angels and Demons, which is my original impetus for visiting. 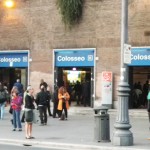 Metro Colosseo Station – Where I emerged in Rome, across from the Colosseum

I stroll over to the Colosseum to catch the Metro and ride up to the stop nearest the Vatican.  I debark and begin the trek to the Castel.  This neighborhood has a different feel to it; it’s okay, but it just seems more drab and dreary — or maybe that’s just a result of the thick cloud cover and mist-filled air.  Might need this umbrella I’m toting around after all.