On my way back to the hotel from Anti Luzzi Café, I notice that the little bar that’s looked intriguing for the last few days is actually open for a change.  As I mentioned earlier, many of the small local-type places don’t open till after six or seven.  The loud (in English) modern rock blaring from within seems particularly inviting, as it sometimes does.  The music only adds to the earlier intrigue, which is due in part to the name of the place, TreeFolks, and also to the sign and font type that look like something you’d expect in a small English town (or perhaps, better yet, in Middle Earth). 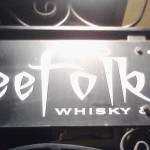 Upon walking in, the intrigue changes – the interior seems better suited to a scene from a Sherlock Holmes movie.  (Where are Robert and Jude?  They must be here somewhere.)  It is definitely like being transported to another time and place.  While it first appears to be reminiscent of a library, upon further inspection, every nook and cranny (and there are plenty, from ceiling on down) is filled not with books but with bottles of whiskey of every variety, along with the classic-looking boxes that once contained them.  How quaint! 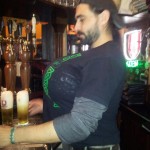 Still no sign of Robert and Jude (or of anyone else on my side of the bar – I am the lone patron at opening hour), but there is a gorgeous long-haired Italiano behind the bar.  (Obviously from this photo snagged from the bar’s Facebook page, he had some work done after I saw him!)  In retrospect, I probably should have just wandered to a table and admired him from afar for a minute and then headed on, given the overall experience at this place was sub-par at best.  The bartender apparently did not speak English (not too surprising, given my experience at the other local-oriented pub in ‘my neighborhood’), but, unlike those at the other pub, he did not seem at all interested in having a patron who did.  I know where I’m not wanted!  Not that it’s enough to stop me from having a beer and checking out the intricate décor in a bit more detail.

Now, the beer…there are probably 20 taps at least, and the only beer I’ve heard of is Guinness (and I’m in the mood to try something different).  After annoying the Italiano with my indecision for a few minutes (he is obviously more interested in finishing his set-up than actually waiting on me), I finally opt for the most unusually named selection I can find, Brew Dog Punk IPA (India Pale Ale).  I have to think he delighted in this selection, that if he had not been able to chase me out the beer surely would.  Perhaps I misread the tap – I think this would more accurately be described as Brew Dog Puke IPA!  Really?  Out of the myriad options available, I pick this putrid-tasting bile?

Anyway, before I know this (not that it would matter), I fork over my four euro (a little over $5) and head over to a table, where I can scan the room more fully.  There is a staircase heading to an upper level, and I am tempted to investigate but decide to stay put.  As I sip my bitter, sour brew, I take in the various comings and going.  There are a couple of young women who breeze in and out, one who seems to be a server coming on duty, the other perhaps an off-duty staff member or a local regular.  I am not particularly comfortable here so, after finishing my beverage, I decide to head back to the hotel to prepare for my journey.  At least I got to see the place after all the intrigue, and the beer was definitely a new and unique experience…

Once in my room, I decide to jump on Booking.com and reserve a room for the following night in Genoa, given that I now have my train reservation and have analyzed every possible route and schedule enough times to figure staying overnight there was my best bet.  As I am booking the room, there is a little voice in the back of my head saying, “Are you sure about this?”  The rate is a no cancellations/refunds rate, but I am certain nothing will change between now and then.  Mmmm hmmm.  Okay, time to wind down.  I call Mom and end up just leaving a voice mail.  Next, I hop in the shower, then go outside for a smoke and, upon my return to the room, try Mom again – another voice mail letting her know I’m heading to bed. 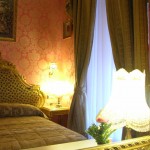 I crawl into bed and turn on the TV to help me relax for the night.  No such luck!  Every channel is showing horrible flooding somewhere, with captions on the screen, in Italian, about the tragedy.  From what I can pick up, seven to nine people are dead, and I keep waiting to find out where this is happening.  It’s on numerous stations and, finally, I flip to one that has a caption that says (drum roll please!) – Genova (the correct Italian name)!  As I continue to watch the news, it is clear the town is in turmoil and likely won’t even be open for business tomorrow when I am scheduled to arrive there by train.

I get back online (keep in mind this is all using my iPod Touch) and e-mail Booking.com about the Genoa booking I just made to indicate I had just seen the news and would call in the morning to verify the hotel status.  I had already been going back and forth with Nicole about switching my dates at her place in France, since I would not be taking a leisurely tour up the devastated Italian coast as I had expected, and now this besides!  (Fortunately, Nicole was most accommodating, so there was no real stress there other than feeling bad I couldn’t be more definite with her; I am not good with waiting for answers, which makes me hypersensitive to creating that situation for others.)

I decide I better try to get some sleep, since I have no idea what tomorrow will hold at this point.  After an hour or two, sleep is still nowhere to be found, as my mind rages about what to do next.  I decide to get back online and find that I have an e-mail from Booking.com that says to call immediately if I want to cancel the Genoa booking.  They had contacted the hotel and the night clerk had not run my card yet, so they would be willing to cancel my reservation without penalty, given the circumstances, if they were contacted before the card was charged in the morning.  I’ve got to credit my intuition with keeping me awake and getting me back online at this point.  So I get right on the phone to contact Booking.com and, four tries later (just a little flustered), I finally manage to connect.  Rikki assures me that, because the hotel had not charged it yet, the Genoa room has been cancelled at no charge, and I will receive a confirmation by e-mail.

Needless to say, I was very pleased with my Booking.com experience.  I booked several rooms throughout France and Italy before and during my trip.  After having heard of multiple booking issues with domestic consolidator sites and not being familiar with Booking.com, I made sure to confirm the first few that I booked in advance through e-mail, so I wouldn’t end up stranded without a room in Europe.  All my bookings were properly scheduled at each of the four respective properties.  This gave me a pretty good comfort level going forward, and they did not disappoint, as I made and cancelled multiple bookings along the way.  And then, the service level for the Genoa crisis was extraordinary (not to mention exactly what I needed at the time).  As a result, I used them for anything I needed during the rest of my trip, even if I could just as easily have walked to the counter of the hotel.

Anyway, now that I have the room cancelled, I realize I need to figure out a different route to the south of France.  The problem is that most of Italy (or at least the west half) is drenched, from Rome north and into Switzerland.  Any route I take will likely involve the risk of travel delays, if nothing else.  As I peruse the various options (and let’s just say the sites for train travel are not some of the smoothest to navigate), I eventually decide that my best bet is probably to stay inland a bit and head to Torino (Turin).  There are fast trains (roughly a four-hour trip) going directly there and it looks like there are plenty of affordable hotel rooms available (important since I can’t book until I know I can get there), so that’s where I’ll shoot for when I get to Termini station tomorrow.  I may just have to eat the ten-euro reservation fee for the Genoa booking, but that won’t be too hard to take since I was at least able to cancel the hotel.  So much for trying to plan ahead to make the next day’s journey less hectic 😉  “The best laid plans…”

As you might imagine, sleep is hard to come by after all this activity in the wee hours, even though I have done pretty much everything I can for now.  My allergies also kick in for some reason, so the inhibited breathing doesn’t help.  It’s going to be a long and spontaneous day tomorrow.  Adventure surely awaits!

← What To Do, Where To Go After Rome
Arrivederci, Roma – On to Torino →